On that evening, Calvin Parker, 19, and Charles Hickson, 42 sat in their favorite fishing spot near an old shipyard. Hickson had just caught a fish when they both heard a weird “zipping sound” coming from behind, then it landed in a clearing about 35 yards behind them.

Turning around, they saw a 30-foot-long football shaped object with two portholes. Suddenly, a door opened and a bright white light streamed out. Seconds later, three five-foot-tall figures glided out of the craft and floated toward the two frightened fishermen.

It was instantly obvious that these figures were not human. The odd-appearing beings were gray-colored with wrinkled bodies and clawlike hands..Says Hickson, “If they had a more human likeness, it would not have shocked me so.

The head seemed to come directly to the shoulders, no neck, and something resembling a nose came out to a point about two inches long. On each side of the head, about where ears would be, was something similar to the nose. Directly under the nose was a slit resembling a mouth.

The arms were something like human arms, but long in proportion to the body; the hands resembled a mitten—there was a thumb attached. The legs remained together and the feet looked something like elephant’s feet.

The entire body was wrinkled and had a grayish color. There could have been eyes, but the area above the nose was so wrinkled, I couldn’t tell.” 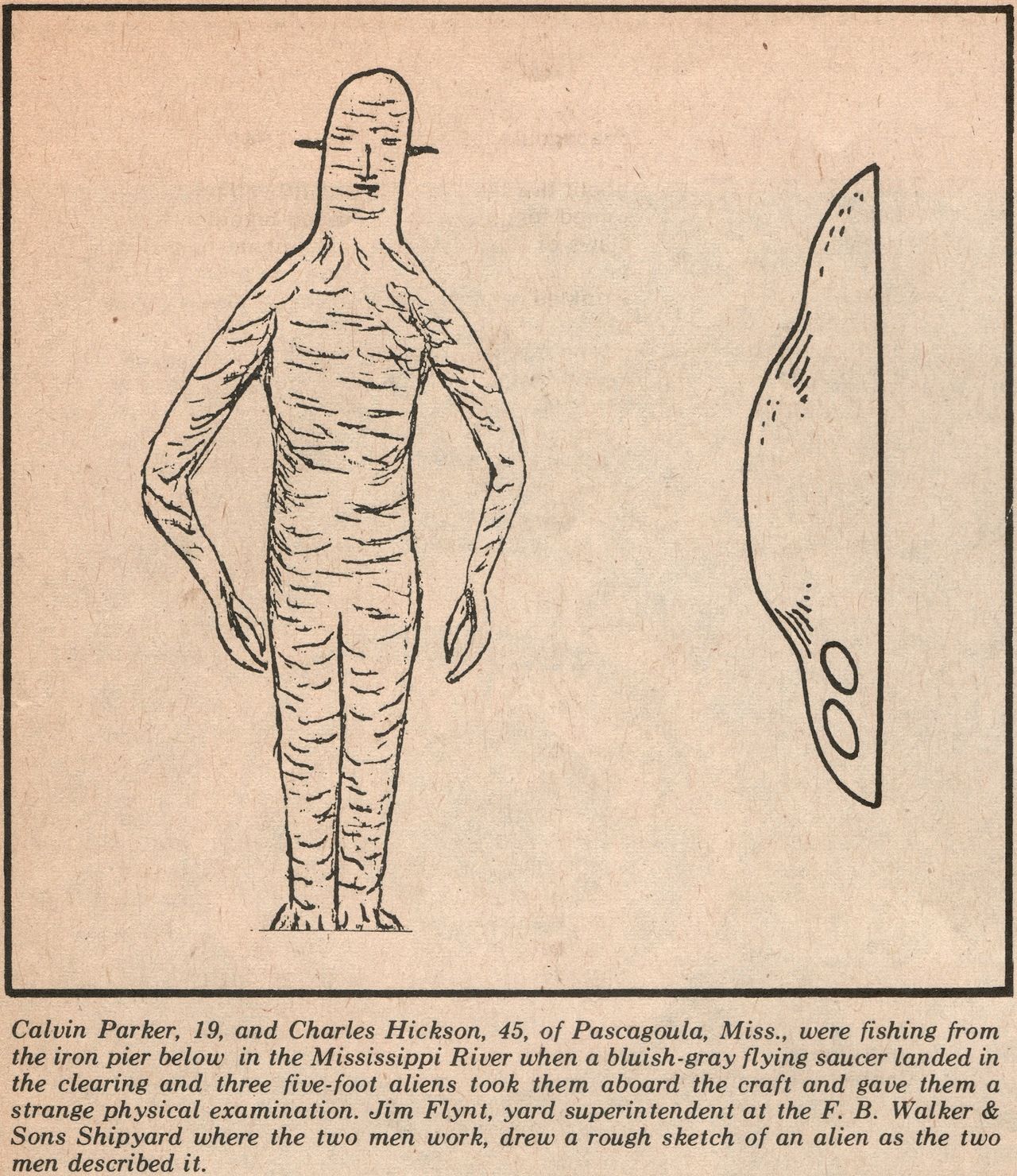 Both the men had the impression that the figures were actually robots. Calvin Parker was so frightened that he fainted. Two of the entities grabbed Hickson by the arms, and the man felt himself becoming paralyzed. The third picked up Parker, and together the group moved back into the craft.

Hickson, who has since died, tried to explain during the 1973 interview what happened and what he saw, including going into the craft.

“And they glided me into that thing,” Hickson said. “You know, how you just guide somebody.

“All of us moved like we were floating through air. When I got in there they had me, you know, they just kind of had me there. There were no seats, no chain, they just moved me around. I couldn’t resist them. I just floated, felt no sensation, no pain. They kept me in that position a little while, then they’d raise me back up.”

Hickson also tried to describe a machine he thought was used for a medical examination.

“No, it wasn’t like no x-ray machine,” Hickson said. “There ain’t no way to describe it.

Hickson answered many questions and described the the aliens as being about five feet tall with a single leg and foot-like appendage without toes. He said they had what appeared to be ears, a nose and a mouth, but none of the features looked human. He said he was so scared he couldn’t remember if they had eyes. He also said he couldn’t remember details about leaving the craft, only Parker’s reaction.

“The only thing I remember is that kid, Calvin, just standing there,” Hickson said. “I’ve never seen that sort of fear on a man’s face as I saw on Calvin’s.

“It took me a while to get him back to his senses, and the first thing I told him was, ‘Son, ain’t nobody gonna believe this. Let’s just keep this whole thing to ourselves.’ Well, the more I thought about it, the more I thought I had to let some officials know.”

Charles Hickson, however, had been in the Korean War and knew what intense fear was like. This experience, he said, was far scarier. He found himself in a room with white, rounded walls, floating and unable to move. They were each taken to separate rooms.

Next, bright light with an eye-shaped lens came out of the wall and circled around his body as if it was examining him. The E.T.s left for a moment.

Hickson called out for his friend, but got no response. Moments later, the E.T.s returned and floated Hickson back into the first room and then outside the craft. Calvin was also there, shaking with fear.

The E.T.s then returned to their craft and took off. As they left Hickson received a strong message through telepathy from the E.T.s: “We are peaceful; we meant you no harm.” The two men raced to the police station to report their encounter.

Further investigation revealed that several police officers in the area had also seen UFOs around the same time. The case soon became hugely famous. Both men later underwent hypnosis and lie detector tests. No evidence of hoaxing was ever found. Hickson later had further encounters involving much of his family.