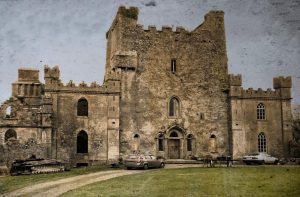 Most places and entities we cover in these articles range from simple hauntings to mass hauntings, ghosts to poltergeists. These are all the more common entities, but there are those far less common and far more sadistic, powerful, and dangerous.

These entities have many names: elementals, demons, even ancient gods if you look far enough back in history. This is an article about one such entity known only as “It” and the ancient castle it calls home. Welcome to Leap Castle…

Almost one thousand years ago there was an even more ancient Druidic temple used for the communion of their gods, which they knew as elementals. Unfortunately, the temple had the bad luck of being located directly in the center of Ireland making it a hot spot for clan warfare.

Years of feuding and the ruling O’Carroll clan’s attempts for the union called for a bold stand to be taken, and so through the O’Bannon clan, a chieftain clan under the rule of the O’Carroll’s, Leap Castle was built on that very spot.

Even more unfortunate for the local Druids was the placement of the O’Bannon’s as the authority of the region and the keepers of Leap Castle. The O’Bannon clan were not quite the visionaries that the O’Carroll’s were, oppression, torture, and murder was more their thing.

In fact, many tales from the time tell of the O’Bannon’s tossing Druids and anybody else they didn’t like into a large fissure that had opened in the foundation of the castle.

So just to summarize: The O’Bannons move in and build a castle on top of a Druidic holy site where the now evicted Druids used to commune with their “god”, then they start feeding the god’s worshippers to it. What could possibly go wrong?

There was far more going on within those castle walls than we know of from the tales of the time, in the 20th century an intricate and massive network of deep dungeons carved into the rock, bricked-up passages, and secret chambers were discovered. Within these chambers twelve skeletons were found exhibiting what appeared to be indications of ritual killings. Were the O’Bannons practicing black magic?

Despite numerous attacks and attempts at seizing the castle, the O’Bannon clan managed to retain it until 1532 when the death of Mulrooney O’Carroll threw the family into a brutal power struggle, not just with the other chieftain clans but amongst themselves as well.

The O’Carroll clan took possession of Leap Castle, but with them too there was in fighting and treachery. One of the sons of the O’Carroll clan was a priest and well removed from the clan warfare, as such he had visited Leap Castle in the hopes of acting as a peaceful emissary. This was a mistake.

His own brother suspected the priest of acting as a spy for the other clans and stabbed him through the chest with a sword from behind while he was reciting the holy rites. His body was of course tossed down the hole.

The O’Bannons and O’Carrolls fell from power more than fifty years later, and the castle fell into the ownership of the Darby family. Not having an interest in tossing people down a hole the Darbys sealed the fissure as well as carrying out numerous other refurbishments throughout the castle ending in 1659.

Above the main hall of Leap Castle’s tower is a chamber called the ‘Bloody Chapel’.

This was the place where the elder O’Carroll son stabbed his brother the priest. It’s said that the chamber is connected by a hidden passageway to the fissure at the base of the castle.

While the Darby’s owned the castle, overnight guests frequently experienced the terrifying specter of a tall female figure. Each time she would appear in the same form, her right hand raised menacingly above her head and seemingly illumined from within. Her appearance would cause tremendous physical discomfort as though a person’s bones were being stretched.

The witnesses also reported an extraordinary and violent cold feeling in the region of their heart. If only this was “It’s” only form. The entity has also been witnessed as a foul smelling spectre, half-human, half-beast, and truly terrifying in every way.

Locals will tell you that this form is the embodiment of every horrific evil deed that had taken place in Leap Castle throughout the centuries.

Whether you see the woman or the beast forms of the entity it is without a doubt with you at all times you are within the castle walls. In every inch of the castle visitors cannot escape the constant sensation that there is something watching them, sometimes from so close that they can feel it breathe.

If you’re brave enough to visit Leap Castle, you may also be interested to know that there is treasure hidden within its walls. A Royalist, Jonathan Darby who was known as the ‘Wild Captain’ hid a fabulous hoard of treasure in the castle.

According to legend he employed the help of two servants in the hiding of the treasure then murdered them to conceal its location. Before he was able to retrieve the treasure he was imprisoned for treason and went mad during his incarceration.