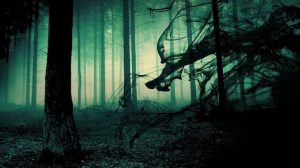 Hoia-Baciu Forest has been called the “Bermuda Triangle of Transylvania”. This dense forest first gained notoriety in the late 1960s when biologist Alexandru Sift snapped several amazing photos of flying disc-shaped objects in the skies above the forest canopy. People who enter the forest inexplicably get rashes or begin to feel very light-headed and become ill. Also electronic devices are known to inexplicably malfunction in the area. Some paranormal investigators associate these unknown malfunctioning with supernatural activity.

Some believe that the forest is the gateway to another dimension. Several stories are often told that exhibit people entering the forest and experiencing missing time with no recollection of how they spent that time. One such story focuses on a 5-year-old girl who wonders into the forest and gets lost. She reemerges from the forest 5 years older still wearing the untarnished clothes that she wore on the day she disappeared with no memory of where she had been.

More recently the paranormal energy of the forest has taking on the form of poltergeist and ghost activity. In one paranormal television series an investigator in the forest is scratched and thrown on the ground. People also claim to see bright lights within the woods. This paranormal activity seems to be focused in an inexplicable clearing in the forest that is a vegetation dead zone. It is nearly a perfect circle in the woods where nothing will grow. Soil samples have been taken from the site and analyzed but results show that there is nothing in the soil that should prevent the growth of plant life.

UFOS, a dead vegetation zone, lights with no logical source, poltergeist activity, EVP activity, and malfunctioning electronics are the documented paranormal happenings of this creepy forest. While most of the stories about this legendary location may be over exaggerated, it is hard to ignore the fact that something is going on in this forest that we may not understand given the recent well-documented occurrences of poltergeist activity

Aokigahara (also known as the Sea Of Trees) is a forest in Japan that is located at the base of Mt. Fuji. It has historic ties to the evil spirits of Japanese mythology. It is eerily silent all throughout the forest due to a lack of wildlife and the trees block the wind so not even it makes noise. Another thing that makes this forest different from others is that it is also a popular place for people to commit suicide.

Suicide is a serious problem in Japanese society. Some officials even say that Japan is currently going through a suicide epidemic. Even though the Japanese government has criminalized suicide, it is still generally tolerated in current Japanese society and sometimes even seen as a moral way to end one’s life. This view of suicide stems from the Japanese tradition that there is honor in suicide. During the reign of Imperial Japan it was considered an honor to literally kill yourself for your country. Kamikazes and katen torpedoes are examples of such suicides. Also, the legendary samurai could only die honorably in battle or in a ritualistic suicide. But why do so many flock to Aokigahara to end their lives? What is special about this location? 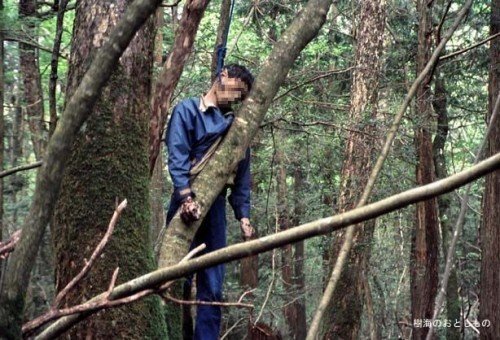 Some have tried to associate the popularity of committing suicide in this dark sea of trees to the 1960 novel Kuroi Jukai by Seichō Matsumoto. In the book two forbidden lovers commit suicide together in this forest, but this theory does not make sense as the suicides started before 1960 so it would seem that the forest inspired the story. Also, the forest has long been associated with death. In the 19th century Aokigahara was used in the practice of ubasute. Ubasute was the practice of abandoning elders in remote locations when they became too much of a burden on their families. They were left to die from starvation, dehydration, or the elements.

Whatever drives people to this forest it is undeniable that it has become a magnet for those who are tired of living. The situation has gotten so desperate that the Japanese government even puts signs all through out the forest with optimistic messages like “Please Reconsider” and “Think of your family”. Despite their best efforts suicides still occur here all the time. This has made the forest attract something other than just the depressed. It also makes Aokigahara one of the most haunted places in the world.

Many paranormal investigators have had the opportunity to investigate this location and none have been disappointed. In an episode of Sci-Fi channel’s Destination Truth, an investigation team goes into the Aokigahara with the intention of conducting a paranormal investigation. During the investigation the team discover a long abandoned campsite and a family photo that has been cut into pieces. This causes tensions to rise amongst the investigators. The team also uncovers two interesting pieces of evidence. One is an EVP that seems to be uttering the words “Get Out”. The other is video evidence of what appears to be a strange human looking shape in the woods.

Many claim that Yurei haunts the forest. Yurei is a word for restless Japanese spirits. Others also claim that demons inhabit the forest and when people enter with suicidal thoughts the demons will prevent them from turning back. Some have described this experience even when they are not suicidal but are simply visiting the forest. They describe feeling panic and say that it is almost like the trees are trying to engulf you. If you plan a visit to this forest sometime in the future be sure to keep your eyes open for the restless ghosts of the suicidal and listen for their moans of agony. Also, bring along a recording device because the area is a hot spot for electronic voice phenomenon.