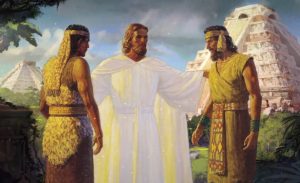 According to Mormon doctrine, Jesus appeared to the American Nephite Tribe and chose 12 disciples. Jesus asked each what his aspiration was.

Three wanted to remain on earth to continue their work. Are they ancient humans who survived ravages of time or supernatural beings not of this earth?

In 1944, a couple gave a hitchhiker a ride in their pick-up truck. After he got out of the vehicle, he said, when they returned home, they would transport a dead man and the war would end in August.

On the way home, they saw an accident’s wreckage and removed a corpse from the car to drive it to the closest town. WW II ended in August 1945.

Mr. Rencher drove his wagon and gave an elderly man a ride. The stranger spoke about the Book of Mormon. Rencher was entranced by his knowledge. Usually, he stopped to visit friends during his travels. That time, he waved instead. When the stranger alit from the wagon, the horses spooked.

While Rencher tried to calm them, the hitchhiker disappeared. Rencher was curious. The next time he was traveling, he asked friends if they knew the man. He was told no one was in the wagon with him.

Stranger at the Door Was a Nephite

An elderly man knocked on a cabin’s door and asked if he could join the family for dinner. He was invited to share their meager meal: onions, bread and water. He ate and offered to pay for the food. Payment was refused. The stranger left. The eaten food reappeared on his plate. During famines, the family’s pantry remained full.

A stranger knocked on the door of Isabella and John Price’s one room home they shared with John’s parents and their sickly infant whom neither medicine nor prayer could cure. The man asked if he could nap by the fire. Grandpa agreed.

Grandma woke during the night and saw the stranger sitting at the table, covered by a radiant white cloth, eating glowing white bread. The family owned no such fabric and didn’t have white bread. In the morning, Grandpa walked with the man, then returned home. The baby was healthy, giggling and cooing.

A man in a decrepit wagon drawn by skinny horses asked if Niels Nielson could lodge them for the night. Niels said a neighbor could pasture the animals and went to the farm with the stranger. Niels offered to share dinner with him.

While they ate, the stranger said he’d stopped at other places, but no one offered to help him and said they would regret it. The stranger talked of places he visited. Mrs. Nielson asked if he’d been in Kansas, adding she was from Atchison. The man spoke accurately about mutual friends.

Soon after the stranger left the next day, Nielsons’ relatives arrived, traveling on the same road the visitor took. They saw no one on the thoroughfare, the only way to the farm. Those who denied the visitor’s request endured hardship while the Nielsons thrived.

Are they Jesus’ disciples as Mormons believe? Are they apparitions? Angels? Nomadic humans? Or, as some UFOlogists might propose, aliens? There are many documented cases of these mysterious men, so it’s logical to consider they do exist. The puzzlement is in not being able to explain exactly who or what they really are.

As for the healings, abundance and prophecies, could these be mere coincidence?