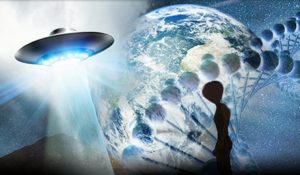 Aliens abduct people to create hybrid creatures from their own and human genetic materials. This was stated by Dr. Jung Hai Chi, who teaches Korean at the University of Oxford.

According to Chi, global climate change on our planet is harmful for humanity, so aliens create hybrids to help people solve this problem.

Dr. Chi believes that there are already a lot of people walking between us who are actually hybrids of people and representatives of the alien race. And this is the second generation of hybrids.

In 2012, Chi mentioned aliens and hybrids in his lecture “Penguins and the environmental crisis”, and he recently published a book about hybrids.

“Not only scientists and theologians are concerned about the survival of humanity, but also aliens. Reversible climate change can not only save the world, but also show aliens that their low estimate of people’s potential was wrong. However, now they see the impending death of human civilization, their response to this may be a hybrid project, “- says the teacher.

The new book Jung Hai Chi has been released only in Korean and is called “Alien invasion and the End of Humanity”.

Dr. Chi is now looking for evidence of his theory, that is, those very hybrids, but he is already confident that these creatures have a very high level of intelligence and can solve the problems of the future of humanity.