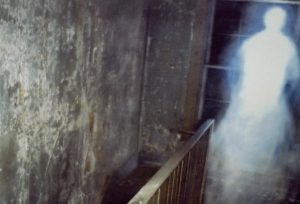 In Eau Claire, Wisconsin, for 25 years, my wife and I operated a retail sporting goods store and above the store were 4 apartments usually rented to college students. Up until a few years ago, when we were asked if we had any ghosts in our old building we would always answer, “No, not that we know of.”

That changed a few years ago when a young couple who were renting Apartment C were having problems in their relationship. The young lady took a job in another state and moved out. The young man was devastated.

It was obvious to us that he was in emotional turmoil and not eating or sleeping well. He came to my wife after the Memorial Day Holiday with a bill from a locksmith for having his lock changed.

He felt certain that someone was entering his apartment while he was gone. At various times his refrigerator was unplugged; personal items were moved about and things had fallen from their normal position. He hinted that we may have entered his apartment without his knowledge. We assured him that this was not the case and that we were gone during the time in question.

Several days later he came to my wife to report that a light fixture dropped just as he had walked under it. He was visibly shaken. About two weeks passed when he and a couple of the other tenants came to us and reported that they thought we had a ghost. They had done some research at the university library and determined that the ghost was that of a young woman who had been murdered by a shotgun blast.

The circumstances leading to the murder are not clear but she seems to appear when there is a young person or couple involved in emotional turmoil over their relationship. She also seems to manifest her displeasure with young men in these circumstances. The research of the property indicated that approximately 100 years ago there was a tavern beneath this apartment and the upstairs was occupied by a young prostitute.

The conclusion by all was that this was the presence in Apartment C. The young man left shortly after that and the apartment’s occupants since then have not reported any paranormal events.

We related our ghost story to our daughter and son-in-law who had lived together in this same apartment for a short time during their college days.

During this time their relationship also suffered some ups and downs and nearly ended. Our son-in-law said he had experienced similar happenings but he sheepishly admitted that he thought my wife, and now mother-in-law, had been coming into the apartment unannounced.

From then on, we can tell those that seek a paranormal experience – Yes, we have a ghost!