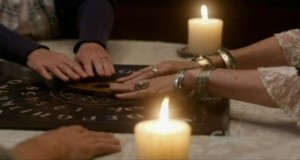 The Ouija board, also known as a spirit board is a flat board marked with the letters of the alphabet, the numbers 0–9, the words “yes”, “no”, “hello” (occasionally), and “goodbye”, along with various symbols and graphics.

Ouija Boards are known to teenagers across the world as the easiest way to create spooky, hair-raising experiences. Most people see them as a toy, something to play with. The fact that they were even mass-produced by games companies only adds to the ‘harmless fun’ factor.

However, many expert mediums believe they should not be approached with such a nonchalant attitude. They say that countless people end up in dire straits simply from fooling around with Ouija boards; some experience mental breakdowns or relationships disintegrating, some end up possessed by spirits and some are even driven to suicide.

Nobody is precisely sure when the first Ouija board was made, but it seems that similar types of apparatus have been around for well over a century. The board itself consists of the letters of the alphabet, the numbers zero to nine, and the words ‘yes’ and ‘no’.

In fact, the name Ouija comes from the words for ‘Yes’ in French and German. The people using the board all gently touch a pointer which slides around the board, forming words that answer the questions asked by the sitters.

Officially, manufacturers of the boards say they works by tapping into the collective sub-conscious, but the item is generally regarded as a way to talk to spirits. Indeed, during the Second World War sales of the board peaked as people tried to contact loved ones lost in battle. 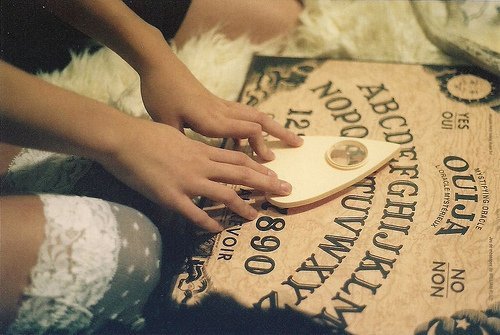 The Ouija board then had a resurgence in the 1960s during the days of heightened spiritual interest. It was overtly marketed as a game, but media stories questioning the effect of the board on people’s emotional, spiritual and psychological equilibrium led to the items being removed from high-street shops. The dangers people face when using the board are obvious.

If the sitters are trying to contact the spirit world, then they are probably dealing with something about which they know nothing. Just from a common sense point of view, there are dangers involved similar to modern forms of communication; you never know exactly who you are talking with, no matter what they tell you.

It is claimed that especially mischievous or evil spirits try to contact people who are using Ouija boards without any clear idea of what they are doing.

But, like modern technology, viewed and operated in the correct, careful way, people can have a lot of enjoyment. Experts are particularly keen to warn people of nervous dispositions, who may be susceptible to unhealthy suggestion, to stay away from Ouija boards.

There have been reports of extreme activity during sessions, with inanimate objects moving independently and lights flicking on and off. There is also no scientific proof to say exactly what is causing the words to be spelt out.

If people really want to try contacting the spirit world it is probably advisable to visit a reputable medium who can guide and control sessions.

However, there are some Ouija board experiences that actually prove to be lifechanging successes. Many of the established mediums began their careers using Ouija boards, and there is a strong argument that the boards help you become more sensitive and appreciative of the spirit world. One such case happened in 1913 to Pearl Curran, a housewife from St Louis.

Curran was dabbling with a friend’s board when a spirit supposedly called Patience Worth contacted her. Curran and this entity progressed and she started to practise automatic writing, resulting in the production of over a million words of poetry, drama and fiction.

Of course there was always the possibility that Curran was a naturally gifted writer and just pretended a spirit had initiated the writing.

She may even have been the unwitting reincarnation of Patience Worth. In either case, the prose was of a good enough quality to be published and receive substantial acclaim from readers. However, not all experiences have this result. Whatever intellect is being harnessed, the fact is that with Ouija boards, like life in general, it is best to be careful with things you know little about.