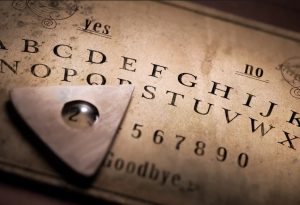 Many people think the Ouija Board is just a game while others see it as a tool for divination. Some see it as a portal for demons. Using it isn’t without potential dangers, be it paranormal or psychological.

Some psychiatric expertsbelieve Ouija boards are portals that free demons from other dimensions to prey on humans.

Psychiatrist and parapsychologist Dr. Alberto Gonzalez of the Pan American Institute of Health believes demons exist and can possess people, causing nonviolent people to commit heinous crimes. This might happen when people use Ouija boards.

Dr. Marta Prohazka is convinced spirits can play frightening destructive games with human behavior. During her practice as a psychotherapist and psychoanalyst, she realized that many patients she considered paranoid schizophrenics might have been in touch with something invisible to her but discernible to them brought on by using the board.

Police arrested seven people in El Cerrito, California after they used a Ouija board on 3/7/20. One fifteen year old girl was found naked because she said it facilitated communicating with spirits.

Later, the hysteria spread to others, including a police officer who shed his clothes and ran into a local bank. Officials brought in mental health professionals to examine the townspeople.

To prevent future hysteria, Ouija boards were banned from town.

Ouija Board and Murder

In the 1930s, courts convicted Dorothea Turley and daughter Mattie of murder after the child killed her father with a shotgun. Fifteen year old Mattie testified how the Ouija, used by her mother, directed her to kill him.

The judge and jury determined the murder was more involved with a life insurance policy and Dorothea’s secret lover. She was sentenced to prison; Mattie to reform school. A higher court overturned Dorothea’s sentence three years after her incarceration. Mattie remained in reform school until she was twenty-one.

In 1935, seventy-seven year old Herbert Hurd of Kansas City told police he killed his wife, Nellie, because she received messages from the Ouija board claiming he had an affair and he had given his lover $15,000.

Nellie tortured Herbert by tying him to bedposts and whipping him. She burned him with a hot poker, stabbed his shins and forced a confession by holding a gun to his head. Herbert got the gun after Nellie left it on a nightstand. He grabbed the revolver and killed her. The court ruled the killing a justifiable homicide.

Carol Sue Elvaker of Minco, Oklahoma killed her son-in-law, then put her daughter and two grandchildren into a car and drove toward Tulsa. She slammed into a road sign trying to kill all of them.

She managed to vault a median barrier, tear off her clothes and run naked into the forest with two broken ankles. Elvaker was charged with first-degree murder and found not guilty by reason of insanity.

Ouija Board and Demonic Possession

A Cottage City, Maryland boy began displaying bizarre behavior after he and his aunt used the Ouija in 1949. There were also paranormal phenomena. The Washington Post reported the strange incidents.

The possessed boy was exorcised in St. Louis and was the inspiration for the book and movie The Exorcist by William Peter Blatty.