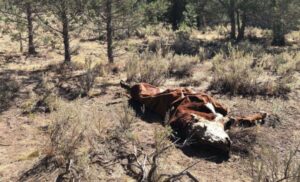 Oregon authorities are investigating yet another series of bizarre cattle mutilations that have occurred over the past few years.

Officials recorded the last case literally this month. The killings took place in eastern and southern Oregon. Police said they are going to introduce additional patrolling and urged local residents to be more attentive.

Sergeant Mitch Madden said that at the moment the police are investigating cases of killing animals in which different parts of the body were removed from them. This streak follows five murders in the past year. This also happened in 2019. Then the animals were killed in a completely unnatural way.

In most cases, the animals had their eyes, udder, intestines, genitals, ears, and even cheeks removed. The organs were cut from cows even when they were alive, but at the same time they were completely immobilized in an incomprehensible way.

During the procedure, there was no bleeding, and incomprehensible tools were used to cut out the organs, which the authorities “did not see” on our planet.

It is worth noting that the FBI has a whole dossier of a huge number of such cases in the United States. The first of them occurred back in the 70s of the last century, but at the same time, it was not possible to find the culprits for all this time.

Cattle mutilation is the killing and mutilation of cattle under unusual, usually bloodless, and anomalous circumstances.

In 1974, a few months after the first spate of alleged mutilations in the US, multiple farmers in Nebraska claimed to witness UFOs on the nights their cattle were harmed.

One claimed he saw an object which “looked as if it had a little bluish-green light on each side with a glow surrounding it.” The sightings were hailed by UFO researchers as the first physical evidence of extraterrestrial life.