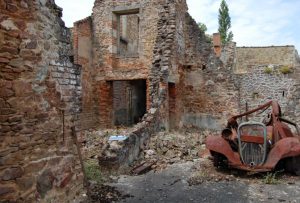 World War Two had its fair share of atrocities, many histories such as the Holocaust are taught in schools around the world, but some have all but been forgotten if it weren’t for what they left behind.

Just about directly in the middle of France, as distant as one can be from any of the four major French cities without actually leaving France, there sits the remnants of a village that once had a very unfortunate name and now has nothing but ghosts. Welcome to Oradour-sur-Glane…

The occupation itself was within months from ending and it’s possible that SS-Sturmbannführer Adolf Diekmann, commander of the 1st Battalion of German Waffen-SS was in a hurry to exact some revenge. This might explain why he confused Oradour-sur-Glane for Oradour-sur-Vayres.

On the morning of 10 June 1944, Adolf Diekmann and his regiment of Waffen-SS entered the village of Oradour-sur-Glane. He gave orders for all the townspeople and anyone unlucky enough to be traveling in the area to assemble in the village square so that they could have their identity papers examined.

Cooperative or not, the townspeople were split into two groups: the women and children were led to a church and sealed inside, while the men were led to a barn on the outskirts of the village and well out of sight. 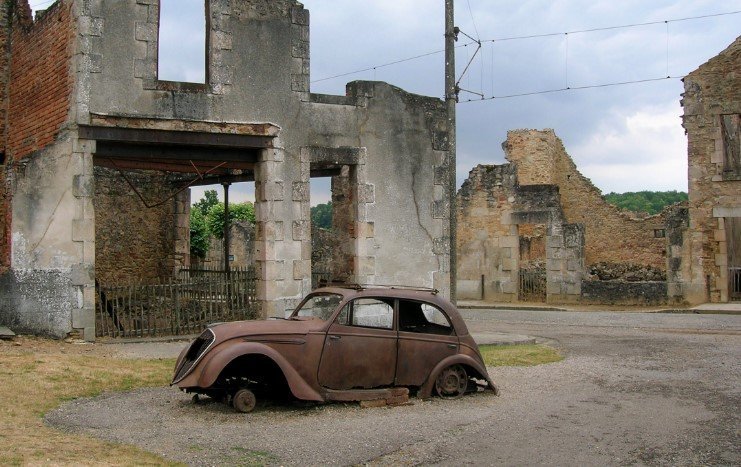 When the men arrived at the barn they were greeted with emplacement machine guns that had already been assembled in preparation for their arrival, and you can guess the rest.

The men however were lucky, every male resident of the town was killed instantly upon arriving at the barn, but for the women and children it would be a different fate. The Nazi troops spent the next hours looting the town and celebrating in their victory until finally the orders came and they lit fire to the church burning alive almost every woman and child in it.

In total 642 villagers were slaughtered without cause in Oradour-sur-Glane, of those 642, 247 women and 205 children died in the carnage. Each died without a clue as to what had brought this fate onto their village.

Several citizens of Oradour-sur-Glane were traveling at the time of the massacre and returned to their village not knowing what had happened – they, along with Marguerite Rouffanche, were taken prisoner and forced to bury the corpses of their neighbours.

The events just described would have been more than enough to enrage the spirits of those killed in Oradour-sur-Glane, but it gets worse. Fourteen of the invading German troops were ‘Alsatians’, French nationals of German ethnicity.

When the occupation ended that same year the survivors would tell their story and demand justice. Unfortunately these Alsatians would fall under the French parliament’s amnesty law for malgré-nous and would be released without penalty.

With the conclusion of the war, General Charles de Gaulle declared that the village of Oradour-sur-Glane in its existing state must never be changed and would serve forever as a monument to those massacred, and so today it remains much as it did in the days following the slaughter.

Rusted cars are left derelict in the streets, the buildings decay untouched for decades. In the classical sense of the term it is a proper “ghost town”, but it also has its very real ghosts as well.

A new town was built neighbouring the original, and again named Oradour-sur-Glane in 1958. The new residents of this town know better than to enter their namesake and neighbour which they have nicknamed Village Martyr, the “martyred village”.

Instead they watch from their windows at night as dark shadows pass through the streets, they endure the strong scent of burning wood and flesh that occasionally floats from Village Martyr, and they tell the stories of those that still call it home, but they don’t enter.

Until recently it was common practice for residents of new Oradour-sur-Glane to leave gifts at the border of Village Martyr as recognition and hopeful peace offering to the spirits within.

If you’re brave enough, Oradour-sur-Glane is open to the public as a heritage and war memorial. You’ll find numerous notices asking that visitors show respect to the dead, and while this is not uncommon at any memorial, it is highly suggested that in this case you do.