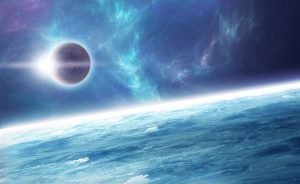 Scientists have found that about once every thousand years, carbon-14 production in the atmosphere spikes, creating potentially devastating radiation storms, reports sciencealert.com.

Astronomers have several hypotheses about what could have caused this phenomenon. However, a full study of these events makes their cause even more mysterious.

High-energy particles collide with nitrogen atoms in the upper atmosphere to produce radioactive carbon-14, the longest-lived radioactive carbon isotope that enters the planetary carbon cycle and is taken up by plants.

This means that rings of ancient trees will help scientists discover what caused the abundance of carbon-14 in the distant past.

Ten years ago, scientists found explanations for the small changes in carbon-14 over the past thousand years, but a huge spike in 774 AD immediately puzzled them.

In 2012, a team led by physicist Fusa Miyake of Nagoya University discovered 774 carbon-14 bursts in Japanese tree rings. It has since been confirmed as a global phenomenon that was named after Miyake.

Dr Benjamin Pope of the University of Queensland describes the new study as the most comprehensive study of the Miyake events ever done. However, he acknowledged that this did not solve the mystery, but only exacerbated it.

The first hypothesis about the Miyake events was that these phenomena were caused by powerful solar flares . If this happened today, most of our satellites, as well as internet cables and power lines, would be destroyed, plunging society into chaos.

It turns out that if the hypothesis is correct, then the events of Miyake will soon coincide with the peaks of the solar cycle. However, scientists were unable to find any evidence for this.

They believe that solar activity amplifies the solar wind and helps protect the Earth from cosmic rays. At the same time, scientists do not deny the possibility of such a scenario.

According to another version, the Miyake events may be caused by supernova explosions or other cosmic events. However, no event in Miyake has coincided with any of the known supernovae of the last millennium, which, apparently, rejects this hypothesis.

Although the authors were unable to explain these events, they learned something very important. At least one Miyake event lasted over a year, while others likely lasted a long time.

“Instead of a single instantaneous explosion or flash, we can observe a kind of astrophysical” storm “, – said one of the authors of the study Qinyuan Zhang.

It is difficult to say when the next such storm will occur.