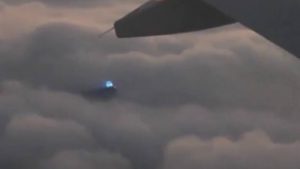 Air MidWest pilots flying near Gloucester observed for half an hour ‘unidentified night lights.’ The close encounter, reported by two pilots on Thursday, February 14, between 8.15pm and 8.45pm, took place during routine night navigation exercises across the area.

The lights have been described as red and orange with white flickers from time to time.

The phenomenon posted on the Facebook page of Air MidWest is described as follows:

At approximately 8.15pm one of our aircraft was tracking south towards Gloucester at 7,000ft after leaving the Birmingham air traffic zone.”

“At the same time one of our other aircraft was also tracking south towards Gloucester at 4,000ft when both aircraft observed one red and one orange lights in the the sky south of Gloucester.”

“We were unable to identify the lights.”

A company spokesman said the lights “defied our normal expectation of standard aircraft or meteorological activity” but admitted that the company hopes to find a “terrestrial explanation.”

Important element of the organism may be of extraterrestrial origin