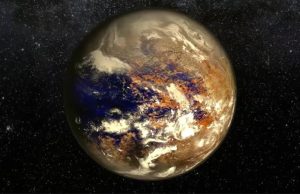 Apparently, there is a lot of water on the exoplanet K2-18b – about 50%, and the planet is also in the habitable zone of its star. The temperature on the planet (from zero to 40 degrees Celsius) allows the presence of life.

Scientists made a discovery by analyzing data obtained from the Hubble Space Telescope in 2016 and 2017. The planet itself was discovered in 2015. It is located in the red dwarf system and is located 111 light years from the Sun.

K2-18b may have a rocky surface, or it may turn out to be an ocean planet with thick ice crust. Its mass is eight times greater than Earth’s mass.

In addition to water vapor, astronomers detected a certain amount of hydrogen and helium in the planet’s atmosphere. Scientists do not exclude that methane, nitrogen and ammonia can also be contained in the atmosphere.

Conditions on the planet may be suitable for life, but so far it is impossible to confirm this hypothesis. In the next ten years, a new generation of space telescopes will be able to find out.