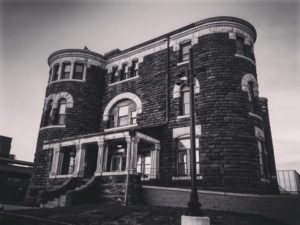 What is old and scary and haunted by the ghosts of people that it sent to an early grave? Dick Cheney, you say? Perhaps, but today Columbus Ghost Tours speaking about the Old Licking County Jail in Newark, Ohio.

Built in 1889 by renowned architect J.W. Yost, the jail served its duty as an institution of punishment over rehabilitation for 98 years before being retired in 1987. Although it was originally designed to house 68 inmates at a time, the location was often intensely overcrowded and no stranger to death.

Columbus Ghost Tours was first made aware of this location by a couple of guests on a ghost tour. Having investigated several haunted locations, they explained that this is the only place they’ve been where they received intelligent responses (the entities used a flashlight to blink once for “yes” and twice for “no”).

The jail has been featured on episodes of both Ghost Hunters and Ghost Adventures with manifestations running the gamut. Cold spots, feelings of foreboding and malfunctioning electronics? Got it. Disembodied voices, moving objects and full blown apparitions? Yep, yep and yep.

When researching what happened in the building to create such an environment it became more of a question of what didn’t happen there that would result in a haunting.

We’ll begin with the suicides. Conditions at the prison were so atrocious that inmates often off’d themselves. Between 1904 and 1961 seven souls were successfully freed by their own hands…in a variety of inventive manners.

In chronological order the methods of suicide are as follows: poison, slit their own throat, shot their own head off, hanging, hanging again, self immolation (Mae Varner had only been confined to her cell 45 minutes before burning herself alive) and yet another hanging. In addition to these deaths six inmates expired from illness within the prison walls.

The most ominous deaths would have to be those of the sheriffs, however. The jail contains a residential wing for sitting sheriffs. Four of them have been found dead in the same bedroom of the residential section and all have been ruled as heart attack victims, one being the grandfather of a good friend to Booze & Boos. Hmm. That peaks my imagination.

The place also held some creepy characters in its heyday. For starts there is Laura Belle Devlin (pictured below). In 1947 the 72 year old lady beat her husband to death then used a handsaw to cut off his head and arms.

Once she’d disassembled her hubby Laura Belle proceed to cremate his bits and pieces in the oven. Police noticed her husband’s discarded torso in the back yard fire pit (she couldn’t shove it into the oven) and interrupted the geriatric gal’s barbeque. If her prison photo doesn’t give you chills I’ll eat my hat!

In 1952 Bernice Butler, aka the Rum Crazed Trailer Murderer, shot her husband in front of their son and a friend. When police arrived she was alternately clawing at his face and embracing his corpse.

Then we have Walter Benjamin Robertson. After 35 years of going steady his fiancee finally said yes. He was so overjoyed that he took a club and bashed her skull in immediately afterwards. He then became one of the hangings listed above.

The list of creepy killers goes on and on.

The most tragic and horrific chapter in the prison’s history happened very early on, though.

In 1910 a 17 year old Carl Etherington lied about his age, saying he was 23, so that he could come to Newark from Willisburg, Kentucky to aide in the effort to root out saloon keepers that were violating temperance laws by operating speakeasies. At the time Newark was “wet” but could only serve half beer. 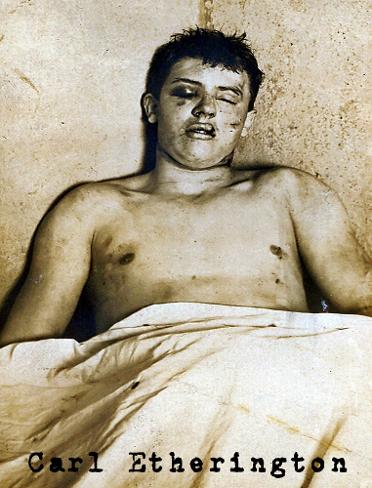 During one of his busts a mob formed outside the bar and Etherington ran out the back door and attempted to flee via train. The mob caught up with him at the station and, at first, he tolerated the attacks.

His patience ran thin and self preservation kicked in when one saloon owner began bludgeoning his head with a blackjack. Etherington fired his pistol at the man in self defense.

The bar owner was transported to a hospital and the crowd continued to beat the boy until the police arrived and took Etherington into custody. They placed him in a cell on the 2nd floor of the jail.

Outside an angry mob of over 1000 waited with seething scapegoat-laden hate. The mayor came out, told the crowd to disperse, went home and settled in for a good night’s rest.

By 10pm word reached the mob that the saloon owner had died from the gunshot and the enraged group breached the jail. Someone woke the Mayor up and told him what was happening.

He thought about contacting the Govenor and requesting the militia but the Govenor was on vacation and happened to be the only person with authority to dispatch them. Oh well.

Realizing what was happening and with no way to escape and no one to help him, the young man desperately attempted to take his own life by beating his head against the wall. When that didn’t work he wrapped his head in bedsheets and lit them on fire. Again, he was unsuccessful. Can you imagine the HORROR?!

The crowd finally reached his cell and beat him to near death with a sledgehammer. After that he was dragged to the corner of South Park Place and Second Street and hung from a utility pole until dead. 5000 people came out to cheer on his passing.

Carl’s last words were “send my love to mother and tell her that I died in performance of my duty.”

To nail the saddness of this situation home his already frail mother died shortly after hearing of her son’s fate and his father hung himself within the year.

Needless to say, Newark citizens were a little embarrassed about their behavior and public perception on the world stage. Oddly enough, they left that utlility pole up until 1953, though.

If you feel that my retelling didn’t give you enough of the story you can spend the night in Carl Etherington’s jail cell if you want to. Or Laura Belle Devlin’s or the cell of any of the slew of infamous inmates of the Old Licking County Jail. For more information and to book an overnight ghost hunt visit the prison’s website at www.parajail.com

A word of warning: visitors to this site claim enormous amounts of paranormal activity and the ghosts here aren’t afraid of touching you.