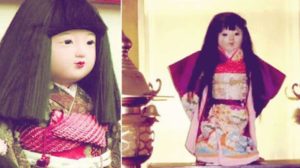 The story of the Okiku Ningyo, ningyo meaning a human shaped doll, began in 1918. A young man named Eikichi Suzuki was visiting Sapporo, Japan and saw a doll which he immediately knew would be the perfect gift for his 2-year-old sister Okiku.

The doll was just under 16 inches tall and dressed in a traditional Japanese kimono with shoulder length hair.

When Eikichi returned home he presented the doll to his sister and it quickly became her constant companion. If the doll was not in Okiku’s possession it was always nearby and was never out of her sight.

The little girl loved the doll so much she named it after herself, Okiku. In 1919 tragedy struck the Suzuki family when Okiku became ill and passed away from a high fever at the age of 3.

The original plan was for the doll to be buried with Okiku, but that didn’t happen. Instead, the doll was placed on a small altar in the Suzuki home for remembrance.

The family soon began to think that there was an extraordinary connection between their deceased Okiku and the Okiku Ningyo. At one point they noticed something very unusual – the doll, which had an ‘okappa’ hair style (cropped at around jawline length and with a small fringe over the forehead), now had noticeably longer hair.

As time passed the shoulder length hair on the doll began to grow, eventually reaching 10 inches in length. The Suzuki family believed that the spirit of Okiku was in the doll. 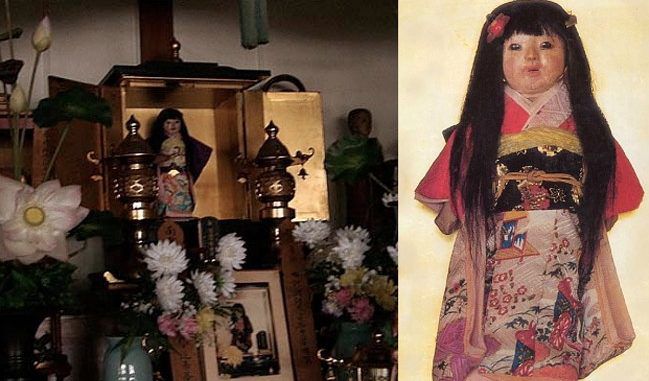 The doll stayed in the Suzuki home for about 20 years. In 1938, Kikuko’s family decided to move from Hokkaido, only instead of taking their daughter’s doll with them, they agreed that it would be best for it to remain on the island.

The doll was then taken to Mannenji Temple where it remains to this day. Reportedly the monks that care for the Okiku doll occasionally trim the still growing hair to its original shoulder length.

Who would be brave enough to give Okiku a hair cut? Apparently a priest of the temple had a dream conveying that this was the doll’s wish, and generally what haunted dolls want, haunted dolls get.

It is said that even a scientific examination of Okiku confirmed that the hair was that of a human child.

Okiku has been residing at the temple ever since, and people often come to see its legendary human hair for themselves, but they are not allowed to photograph it.