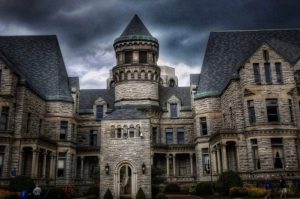 When you think of haunted places what are the first things that come to mind? Huge old castles? Violent deaths? Buildings that embody human misery and suffering? Few places in Ohio fit this bill better than Mansfield’s Ohio State Reformatory (OSR) and, believe us, it delivers.

Designed by famed Cleveland architect, Levi Scofield, the Reformatory was built between 1886 and 1910 using a combination of Romanesque, Queen Anne, Richardsonian and Victorian Gothic styles in an attempt to create a spiritual and church-like atmosphere that would inspire it’s first time offender residents to, indeed, reform their lives. What an optimistic time it must’ve been!

In reality, most people who saw the prison would refer to it as “Dracula’s Castle” and while there were many inmates that turned their lives around, there were an equal number who developed deepened depravity through their time at the OSR.

Just consider that over it’s 94 year history as a functioning prison there were more than 200 deaths, murders and suicides within it’s walls!

Prisoners pushed their enemies from high tiers of the western cell block, slit each others throats, set themselves on fire, poisoned themselves with paint thinner and, in one gruesome instance, an inmate was completely gutted when he was sliced from his hip to his lower jaw by a cellmate.

By the mid 1970’s conditions at the prison were so bad that the Council for Human Dignity filed a lawsuit against the State of Ohio, citing inhumane and brutalizing treatment of inmates.

The lawsuit was settled in favor of the inmates in 1983 and by 1990 the Reformatory had closed it’s doors. Five years later the Mansfield Reformatory Preservation Society reopened the prison as a museum.

One of the more well-known deaths to occur in the Reformatory wasn’t of a guard or an inmate but of a warden’s wife, Helen Glattke. Arthur Glattke was warden of the OSR from 1935 until 1959.

As was customary at such institutions, Glattke lived in the warden’s quarters of the prison with his wife and two sons. They led a seemingly normal life until tragedy struck on the morning of November 5th, 1950.

As Helen was preparing for that Sunday’s Mass she went to retrieve a hatbox from the upper shelf of a closet. Unbeknownst to her, the Warden had placed his .32-caliber pistol on the same shelf for safe keeping.

The gun hit the floor, discharging, and Helen Glattke was shot through the lung. Two days later she died at Mansfield General Hospital.

This is where things get juicy. Rumors abound that Helen had caught her husband having an affair with a member of the prison staff and that she was planning to drag his name through the mud in a very public divorce.

Did the gun fall from the shelf or was it murder? Who knows. Is this all unsubstantiated gossip? Very possibly.

We do know that Arthur Glattke never remarried and, nine years later, suffered a fatal heart attack in the same room where his wife had been shot. We also know that visitors to the warden’s quarters often notice the scent of Helen’s rosewater perfume and the Warden’s tobacco smoke.

Some have even heard an arguement or seen full apparitions of the couple, though never together. Aside from smells, sounds and sightings, people also get touched here and, occasionally, hit or scratched.

The hauntings at the OSR go back to a time before the prison existed. In the years that predated the concept of a Reformatory, a Civil War training camp existed on the grounds.

Camp Modecai Bartley had only been open for business for a couple of months in the late spring of 1861 when a soldier began complaining of terrifying visits from unearthly spirits.

These visitations left the soldier so horrified that he was deemed unfit for duty and sent to an asylum to recover. It turned out that this soldier would be the first of many to experience the supernatural at Camp Modecai.

At first, war trainees and officials began noticing a trend of missing and relocated items that defied explanation. Then soldiers started experiencing unusual ammunition failures when practicing at a certain quadrant of the camp.

Before long it was common for all based at Camp Modercai to report hearing whispers and muffled voices where there should only be silence. In the northeastern corner of the training ground, recruits even reported hearing voices that would emanate from the ground, causing them to question their sanity.

While it’s unclear who and/or what haunted Camp Mordecai, it is clear that the events experienced by it’s residents went above and beyond the normal wartime stress induced hallucinations in both frequency and consistency.

Modern hauntings at the OSR are so vast in their manifestations and locations that an exhaustive listing would be…exhausting. Visitors have experienced everything from camera malfunctions to mysterious voices to violent attacks and sightings of solid apparitions throughout the building. Shadow figures and unexplainable footsteps abound in this dreary place.

Wandering the halls of the building, it is not difficult to imagine the fear, anger, violence and despair that those who were incarcerated here experienced on a daily basis.

To say that each corridor, cell and room still houses these emotions would be an understatement. You can feel them dripping from the walls. Some of you that visit will experience much more than feelings. I guarantee it.

If you feel like rolling the dice, the Ohio State Reformatory offers a variety of tour options throughout the year, including this week’s haunted prison attraction. For more information on their events visit www.mrps.org