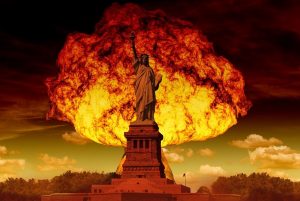 Experts have considered several scenarios for the development of events in the event of a nuclear war, but they all lead to catastrophic consequences for humanity.

Scientists simulated the situation of a nuclear war, and considered several possible scenarios. In any case, this will be extremely sad for the planet and its population, reports the Daily Mail.

Cheryl Garrison of the American University of Louisiana said: “No matter who starts this war, the results will be disastrous. The initiative may come from russia*, the US, India, Iran or Pakistan. As soon as the smoke enters the upper atmosphere, it will immediately affect all people.”

As a result of a nuclear explosion, billions of tons of smoke and burnt carbon will enter the atmosphere, which will instantly absorb sunlight. Within a month, the average temperature of the Earth will drop by 7 degrees Celsius. This is even more than in the ice age.

Even when all the smoke disperses, settling on the surface, the temperature will not return to its original values. Due to the cold snap, 15 million kilometers will be covered with ice, and after that the ice will begin to grow upwards, at least 2 meters.

Shipping in the northern hemisphere will completely stop for several millennia. There will be a second ice age.

Lower temperatures and lack of sunlight will provoke the death of algae, marine plants and small animals. Further, the chain reaction will capture fish, large marine animals, and develop into world hunger on land. Slowly but surely humanity will die out.

* – The editors of anomalien.com refuse to show respect for the occupiers and murderers and will write some proper names exclusively and fundamentally with a small letter. No war!

After the Roswell UFO crash in 1947, the military searched for “child-sized coffins”