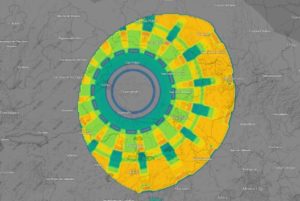 On September 1, 2020 meteorologists detected a huge huge donut-shaped anomaly over Mexico on their weather radar and published by the website Windy.com, a European company that offers forecasting services interactive weather reports around the world, reports ufosightingshotspot.blogspot.com.

“I have never seen anything like that. As you note, the center of the doughnut is not the radar site. And seems to bold a returtn for a roost ring. Gotta be honest: I don’t know! Curious if you see the same pattern around the same time tomorrow?”

But something strange is showing up on this radar as it shows white arrow-shaped clouds that appear over Germany, moving to Belgium and the Netherlands. Then gradually more similar arrow-shaped clouds appear, after which a clear circle becomes visible suggesting that it might be the effect of weather control.

While there are people speculating that the donut-shaped anomalies could be signatures of huge cloaked UFOs or vortex/ dimensional portals that opened in the sky over the city of Guanajuato Mexico and Belgium / The Netherlands, others say that these mysterious circles are the effect of weather manipulation implemented by the European Organization for Nuclear Research (CERN) or the High Frequency Active Auroral Research Program (HAARP).

Although similar mysterious weather radar anomalies have been detected throughout the world in recent years, to our knowledge no one has ever been able to find an explanation for this phenomenon.