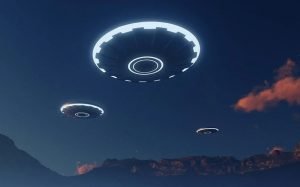 In 1986, a very interesting contact with a UFO took place in a closed military town in the Tomsk region, Russia.

Officer Sergei Mikhailov, who was on duty, was the first to notice how something incomprehensible was happening in the military unit. At first, the light went out, then all the equipment turned off almost instantly.

When trying to establish its work, it turned out that not only the headquarters, but also all neighboring buildings were de-energized. Going out into the street, Sergey noticed how a blue disk-shaped object hovered in the sky above the settlement.

The officer raised the alarm. A few minutes later, several dozen soldiers ran out of the barracks and other buildings. The UFO hung motionless for a long time, after which two more similar objects flew up from the northwest side.

Attempts to contact higher management were unsuccessful. All the equipment in the whole military unit did not work. Moreover, even the quartz clock stopped. The backup generators were not producing power, as if something was absorbing it.

10 minutes passed and the devices began to circle, writing out unimaginable trajectories. At some point, a connection was formed between the three UFOs, consisting, presumably, of electricity.

Its power became stronger, individual lightning flew off to the sides. The military looked at this spectacle with fear. Sergei Mikhailov ordered everyone on the street to take cover in the building. It felt like an explosion was about to happen. But instead, a square energy portal opened, in which the objects disappeared.

When it was all over, the electronics returned to service.

In 2017, Sergei Mikhailov resigned and shared his thoughts with the staff of Kosmopoisk, also known as Spacesearch, a group with interests in ufology, cryptozoology, and other mystery investigations.

It turned out that about 20 similar meetings of the military with UFOs during the USSR appear in various plaes. In the 90s there was a decline in activity. More precisely, there was no recession, the number of military units decreased, respectively, and observations became a rarity.

Encounters with UFOs are often accompanied by turning off equipment, stopping the clock and other influences. And moving through space with the help of some kind of portal is a technology inaccessible to earthlings.

This fact alone allows us to conclude that we are dealing with devices of extraterrestrial origin. Or earthly, but from the distant future.

Russian physicist Mikhail Gershtein believes that the Earth is visited by several types of UFOs.

Some use ordinary water to fly, so they usually live under water or collect it.

The second is energetic, as vampires draw out the entire energy field with their installation and then accumulate it for their own flight.

Still others are vehicles that move thanks to nuclear fusion.

If this gradation is correct, then most likely, in 1986, the Earth was visited by the second type of UFO.