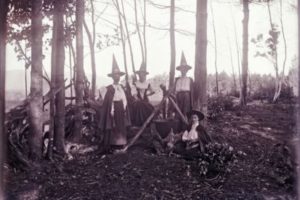 March 1st marks the 326th anniversary of the Salem Witch Trials, where two precocious little girls by the names of Abigail Williams and Betty Parris set off a firestorm of mass hysteria that resulted in the death of up to 33 of their neighbors.

1692 Massachusetts was a bad place to be if you liked letting your freak flag fly, reports Booze & Boos.

While nothing that severe in the way of witches took place here, there are, aside from the many of legends of witches graves scattered throughout the state, a couple of instances where witchcraft reared its warted nose and pointy hat.

A little over 100 years after the madness that transpired in Salem, Massachusetts two young adult daughters of the Hildenbrandt family in Bethel, Ohio tried to start the whole craze up again when they began convulsing and claiming to be bewitched.

The year was 1805 and, according to the rumor mill, it was during the wedding celebration of one of these daughters that she was caught in bed with a man that wasn’t the groom.

Being quick on his toes, the home wrecking guy shouted to the intruders “Help me hold her down! She’s bewitched!” In an effort to add authenticity to the farcical lie, the girl began acting the part. No idea what inspired her sister to get in on the act. Maybe it was a case of monkey see, monkey do.

Hoping to root out the source of the witchery, the townsfolk enlisted the aid of an old lady in Kentucky that was thought to be an authority on such matters. First, the family had to perform a ceremony that was supposed to capture the witch in a bag of linsey-woolsey which they would then chop up and burn.

When that method failed the sage made a charm with instructions that it be placed in the fork of a tree at the fork in a road. The first person to pass the tree would be the witch. And the award goes to… Nancy Evans!

Nancy was an older woman that lived near the Hildenbrandts. She also had a black cat that she spent a great deal of time speaking to as if it were human. That probably didn’t help.

After the accusation was made a Justice of the Peace was summoned and a trial was held where it was decided that a large set of scales would be built. On one scale they placed a bible and on the other a witch.

Any witch would do really but Nancy happened to be conveniently close. The idea was that the word of God would outweigh a witch and that Nancy’s side of the scales would rise into the air.

Nancy weighed a lot more than the bible it turned out and was exonerated of all charges. Since her witch-crazed neighbors had set her cabin on fire before the trial, old lady Evans decided to move to Brown County where she lived out the rest of her days as a well-respected member of her community.

Strangely enough, there are accounts of a Doctor Shilling that wandered Brown County in 1876 removing witchery for farmers at $50 a pop.

Their marriage was a happy one for a few years. That happiness began to wane when Ritter came to suspect that his wife, her brother and a bevy of other townsfolk were witches.

Even though Jacob’s raging alcoholism and beatings of Catherine led to the divorce of the couple in 1873, he continued to stay in her home quite often. This arrangement turned sour in September of 1875 when Jacob came to the house drunk out of his already weakened mind and begged Catherine to release her spell.

After she told him that there was nothing she could do for him, Jacob attempted to strangle Catherine to death with a piece of muslin. He then smashed her head to a “perfect jam” and sat down to write the following letter:

“I have killed my wife because she is a witch. She has persecuted me for eleven months. I have burned her up because burning shall be the reward of all witches, which was a rule when the human race was much wiser. At present we claim that we have so advanced and are still so ignorant as not to believe in witches any more.”

The letter went on to name the residents of New Albany that Ritter believed were in league with the devil.

After completing the letter Jacob stuffed the note in his pocket, set fire to the house and went to the barn and slit his own throat. When police arrived on the scene they were horrified to see Jacob Ritter roll out of the amassing pool of blood and sit up and attempt to speak.

Certain he would not survive the night, Ritter was transported to jail and, as if a victim of actual witchcraft, continued to exist in a horrifying state between life and death for a period of two months.

He was able to eat and walk about the prison but his flesh had darkened and began decaying which made him such a gruesome sight that all were disgusted and shunned him until the day he was finally released from his hellish existence.

There was another witch trial that took place in Ohio’s own town of Salem at the late date of 1893. Here a woman named Sadie Loop was convinced by a herbal doctoress that her brother-in-law, Jacob Culp, was responsible for the death of her sister and a series of other misfortunes and illnesses that befell her family.

When she went to the authorities at her Episcopal Methodist Church and accused Culp of witchcraft a trial was held. Sadie’s plan backfired, however, and it was she that was found guilty of witchery for consorting with the doctoress and was excommunicated from her beloved church.

Does this sort of thing go on today? Sure it does though the consequences aren’t nearly as severe. Many an odd and/or mean spirited woman around the state and the world is living the life of a social pariah. We have just changed one letter in the word that we use to describe such people.

At least one part of Jacob Ritter’s confessional letter was true: “At present, we claim that we have so advanced and are still so ignorant.”