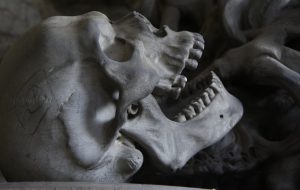 Researchers at the Anthropological Research Facility at the University of Tennessee (the Body Farm) are charged with studying how the process of decay on human bodies takes place.

There, donated cadavers are observed and examined outdoors under various conditions to determine just what happens at specific times to a body in the process of decaying.

Among other uses this information is invaluable in helping law enforcement officials accurately determine time of death in criminal cases. While the process is not for the squeamish it provides a interesting glimpse into how our bodies are reclaimed by the earth.

The moment a person dies their body begins to cool at the rate of about 1.5 degrees Fahrenheit per hour. This cooling process continues until the cadaver reaches the same temperature as the air around it.

Rigor mortis, the stiffening of the bodies muscles due to a lack of ATP (adenosine triphosphate), begins within 2 to 4 hours after death at the head and neck. The process proceeds down the entire length of the body until finally disappearing within 10 to 48 hours.

Flies and other insects quickly arrive at a cadaver and lay larvae at bodily orifices where the maggots can most easily gain entry to the body’s interior. These entry points include the eyes, mouth, genitalia, and any open sores. The goal for the insect larvae is the fat that lies just under the skin which they can then feed and grow on.

Autolysis, The Body Eats Itself

In a living human body enzymes within cells metabolize various substances which are then used to fuel the body. When a person dies the cells no longer have the ability to control these enzymes and they begin to break down the cell walls with the interior fluid leaking out.

The liquid from the eyes is one of the first things to go in a cadaver, spilling out of the eye sockets. “Skin slip”, or “gloving”, occurs as this cellular fluid leaks between layers of skin and loosens them. Entire sections of skin can then slough off a cadaver.

Autolysis is the process of self-digestion that occurs within a cadaver as all this leaking fluid provides food for bacteria located throughout the body; in the lungs, the intestines, and on the skin for example.

Feasting on all this food, bacteria migrate throughout the body causing it to bloat as it fills with gasses that the bacteria expel as waste. A living human being expels this gas on their own, but with no working digestive system a cadaver just fills up with gas.

The most bloating takes place where the largest colonies of bacteria live, typically in the stomach, the mouth (making the lips and tongue bloat), and the genitals.

Bloating continues for about a week until some part of the cadaver gives way, usually the intestines or the torso itself splitting open releasing the pent-up gas. During all this autolysis and bloating the insects have been busy feeding with larvae continually growing larger and more numerous.

Putrefaction is the dissolving of the body’s organs that takes place as bacteria continue to eat fluids that have leaked out of the cells. Because of their high concentrations of bacteria, the lungs and digestive organs liquefy first. The brain goes quickly also, as the bacteria in the mouth work through the soft upper palate, feeding on the organ from below.

Eventually the organs in the torso have all dissolved into an unrecognizable, soupy mixture. Meat-eating insects along with bacteria will also attack the muscles for food.

Depending on the environment and weather conditions the skin may or may not be consumed. With this the process is nearly complete and the body has quietly returned back to the earth from where it came.