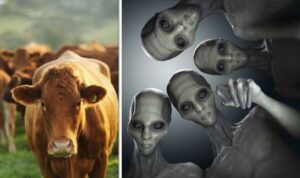 A few days ago, articles appeared in the local press that on February 28, 2022, the police were called at a ranch in Bear Valley due to the fact that a local rancher found his bull killed in an incomprehensible and frightening way, reports sott.net.

The bull’s carcass was reported to have been found with the scrotum cut out, the tongue removed, and the flesh cut from the front of the head.

Sergeant Erich Timko of the Oregon Wildlife Division said the injuries to the bull were consistent with the pattern seen in cases of cattle mutilations that have been reported many times in Oregon in previous years.

“It’s just a mystery,” says Timko. “Strange” is the best word to describe it.”

Mat Carter, rancher of the Crown Cattle Co., whose bull was maimed and killed, found the body of the animal just a quarter of a mile from his home. And the immediate cause of the bull’s death is still unknown.

When Carter found the bull, he was dead for about a day and decomposition processes had already begun. Because of this, according to Timko, they had to refuse to perform an autopsy.

Carter says it’s hard to imagine someone deliberately coming into his territory to kill a bull and then cut off certain body parts from it. According to him, this incident remains a mystery and there is not the slightest clue or evidence to start an investigation and look for those responsible.

And it wasn’t the first time a cattle had been mutilated on his ranch. A few years ago, he found one of his cows mutilated and dead. That time, he failed to reach her body in time, and when he arrived, the cow’s carcass had already been badly damaged by scavengers.

The same thing happened at his ranch in August 2020, and since then he has been carefully studying every cow death in the herd.

Carter’s situation is not unique. Since the 1970s, thousands of unexplained killings and mutilations of cattle have occurred across the US, according to FBI records.

Wheeler County had five such cases in 2021 and Harney County had four in the past four years, with the previous two occurring in May and June.

These cases, according to FBI reports, were very similar to the current Carter ranch case – a cow or bull was found dead in an area remote from houses and roads, with no sign of how anyone could have entered the area or on private property undetected.

In most cases, the authorities found no human footprints, tire tracks or fingerprints next to the corpses. There was little, if any, blood spilled around the bodies, and there were no visible stab wounds, bullet holes, or strangulation marks.

In the thousands of cattle mutilations that have occurred in the US since the 1970s, the culprit has never been identified.

The bizarre nature of the mutilation and the complete lack of evidence in last month’s case make it all the more baffling and disappointing for Carter. According to him, all these injuries simply do not make any sense.