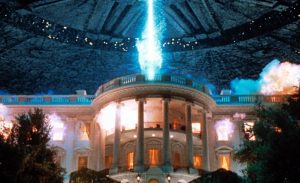 By Tom Secker, a British-based investigative journalist, author and podcaster. You can follow his work via his Spy Culture site and his podcast ClandesTime.

This July 4 weekend marks the 25th anniversary of the much-beloved 1990s alien invasion blockbuster ‘Independence Day’, a tubthumping tale of the US military fighting back against a global incursion by gigantic flying saucers.
You might think that this was a story the US Department of Defense (DOD) would love, and recently obtained archive files show how the producers approached the Pentagon seeking access to military bases for filming, as well as F-18 fighter jets so they could record audio and video for use in the aerial battle sequences.

These never-before-published files on ‘Independence Day’ were exclusively obtained from archives at Georgetown’s Lauinger Library and from the Marine Corps History Division, and they detail how the movie was ultimately rejected after lengthy arguments over the screenplay. Unusually, some of the changes demanded by the Pentagon made it into the shooting script, even after the military turned down the project.

Things started well enough when the producers pitched ‘Independence Day’ to the Hollywood liaison offices as a potential recruitment bonanza.

A memo from producer Dean Devlin to Phil Strub at the Pentagon read, “We’re going to make Star Wars and Top Gun look like paper airplanes! Just wait, there has never been any aerial footage like this before. If this doesn’t make every boy in the country want to fly a fighter jet, I’ll eat this script.”

But the fun police were not happy with the screenplay, and the files detail months of tense negotiations between the producers and the military’s script reviewers.

According to the files, a consistent problem was that the DOD felt the story had “no true military heroes,” because Will Smith’s character drinks beer, dates a stripper, steals a helicopter, and gives fireworks to a child.

The producers removed the beer and beefed up some of the other military characters to try to compensate, but Smith’s character remained a bone of contention. Even after several reviews the military were still urging the writers to “Energize and clean up Steven’s actions.”

The military also had problems with the wider story, and how ineffective they were shown to be in the face of a hostile takeover by extraterrestrials.

One memo on ‘Independence Day’ concluded, “The overall scenario does not leave the public with a positive impression of the military and its capabilities. We see military bases and aircraft decimated by the aliens and ultimately it takes a civilian to stop the alien takeover.” 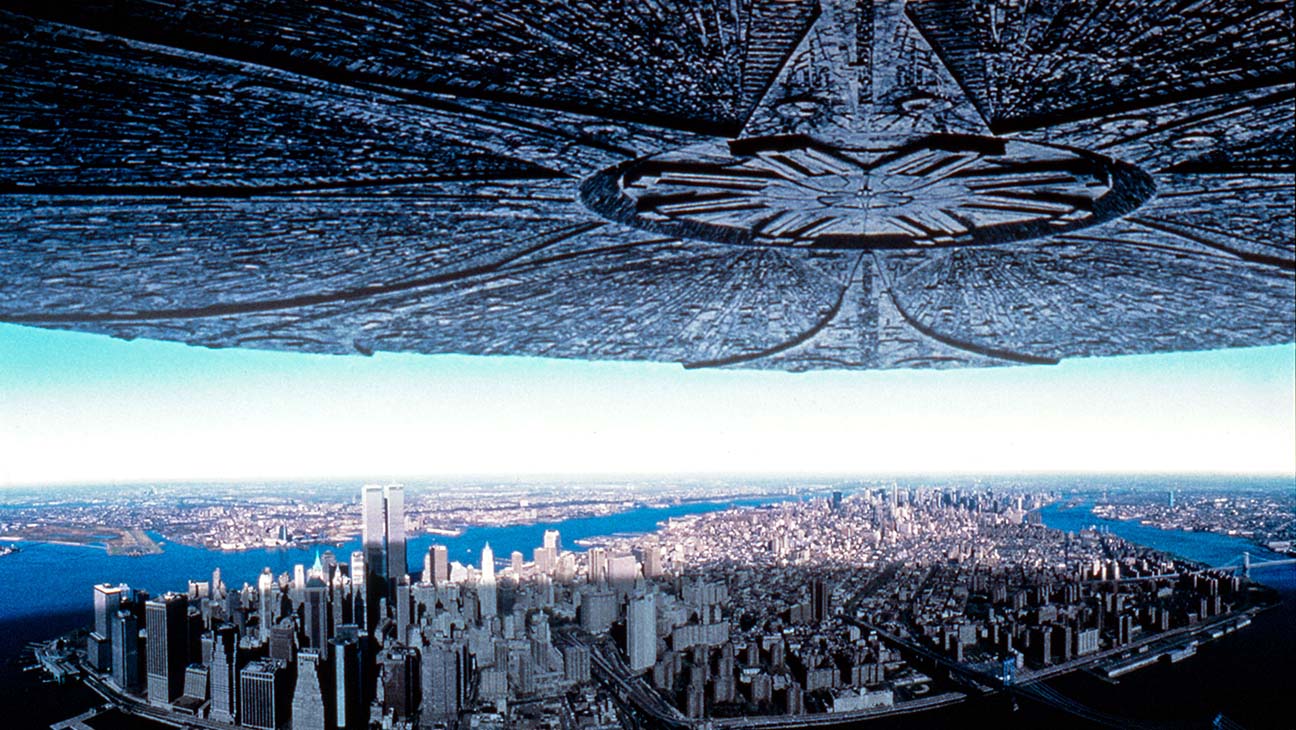 In one version of the script, the files reveal, Randy Quaid’s alcoholic crop duster saves the day by drunkenly flying his crop dusting plane into the giant UFO. The script reviewers didn’t like this climax, with a civilian saving the human race, so it was changed so that Quaid flies a military plane. The DOD still felt this was problematic, because they “Would not want [the] public to think just anyone can fly a hi-tech aircraft; can’t have [a] drunk pilot.”

Script notes sent to the producers say, “Make Russell (crop duster) former fighter pilot; Increase time between last drink and flight of aircraft.” The producers obliged – Quaid’s character was rewritten to have a military piloting background, and he sobers up before taking flight in the fighter jet then sacrificing himself to help repel the aliens.

Other changes, according to the files, were made to try to make the film almost solely a story of US military heroism – Jeff Goldblum’s computer expert character was given an army intelligence background, and the president’s military history was foregrounded. This mostly appeased the DOD’s concerns about someone other than themselves being shown as the heroes, but further arguments were lurking around the corner.

In the early scripts the initial alien attack is utterly devastating, including one sequence the DOD found deeply objectionable, for fairly obvious reasons. As one draft script puts it, after the White House and Capitol are destroyed, “Washed under the WALL OF DESTRUCTION, the Pentagon, too, is blown to smithereens.”

The destruction of their headquarters was apparently seen as unacceptable by the DOD – they were happy to see the entire facade of American democracy destroyed in an extraterrestrial holocaust, but someone’s got to run the country in the post-apocalypse. One fax pedantically counted up all the destruction of military assets in the script, leading to the DOD demanding that the Pentagon somehow survive the fiery decimation, and to tone down the other damage.

Perhaps the most bizarre dispute came over Independence Day’s depiction of Area 51, a secret US Air Force facility in Nevada, and the Roswell Incident. Among the film-makers’ requests to the DOD was one for permission to film at Groom Lake, the real life Area 51, but the Pentagon were not happy with the idea that they were hiding aliens and crashed spacecraft there.

One set of script notes says, “Incident at Roswell AFB is a myth; DOD would not want to support a film which perpetuates myth; DOD cannot hide info from president (i.e. aliens and ship in custody).”

To resolve this problem, according to the files, the military made various suggestions, including “a grass roots civilian group can be protecting the alien ship on an abandoned base” and “Change custodians of aliens and spacecraft to grass roots public protectionist group (or at minimum, nebulous government agency).”

The producers rewrote this sequence to remove references to Area 51, and to put a fictional agency called the NIA in charge of the secret base, but the DOD apparently still wasn’t happy. One memo responding to this version of the script says, “Area 51 – no way, fictional agency or not. We’re sick and tired of hearing about the US government capturing aliens.”

The document then suggests that, instead of the joke about $30,000 toilet seats explaining where the money for the base came from, a character should ask “whether Medicare funds were used to maintain the aliens.” Clearly the DOD was concerned that hardworking American taxpayer dollars were going to fund a life of luxury for creatures who aren’t even Earthlings, let alone Americans.

In the most surreal moment in the ‘Independence Day’ files, the military official’s memo went on to say that the base “Would have to be completely privately-owned – maybe with an alien in charge, morphed into a billionaire global media entrepreneur.” Clearly, someone fancied themselves a screenwriter, or possibly had been reading too much David Icke.

In the end, the producers walked away from the negotiations, having made numerous changes only for the DOD to come up with more problems and objections, and the DOD sent a formal letter rejecting the production. ‘Independence Day’ was made without military support, through clever use of one decommissioned fighter jet and a lot of CGI.

However, while they restored the Area 51 storyline to its original form, some of the DOD’s requested changes made it into the finished film. The rewriting of Quaid’s crop duster character, the removal of the destruction of the Pentagon and upping of the military’s role in the movie all made their way into the version that we saw.

This shows that the Pentagon can wield significant influence over movie scripts even when they don’t end up supporting that production. The military can get some of what it wants even when it offers nothing in return, and a project is rejected by their entertainment liaison officers.

So ask yourself this July 4: Is this freedom and independence as you understand it? If the American dream is to mean anything, does the government need to stop meddling in and censoring movies?