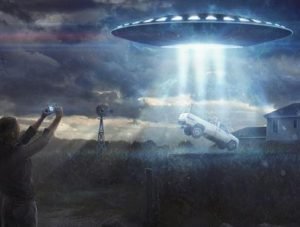 Nick Pope worked for three years in the Department of Defense studying reports of UFO sightings, and now he claims that there is a definite connection between extraterrestrial sightings and the use of nuclear weapons, reports the Daily Star.

Nick Pope said many of the US military’s close contacts were linked to nuclear weapons. They took place near nuclear bases, test sites or nuclear aircraft carriers and submarines.

One of the most investigated incidents is the UFO crash at the White Sands military range in New Mexico in 1945, where the United States tested the world’s first atomic bomb a month earlier.

Witnesses, including a B-52 bomber pilot, a traffic policeman and a US Marine, claimed to have seen the wreckage of a large ovoid object “operated by thin creatures 4 feet tall with large bulging eyes” that looked like praying mantises.

Nick told American television that there seemed to be some connection between the use of nuclear weapons and UFO sightings.

Last week we received the latest report from the Office of the Director of National Intelligence highlighting the fact that there are currently several hundred more sightings under investigation, military sightings, than we have heard before.

The US government is seeing a “huge surge” in UFO reports, and officials don’t understand why. They talk about unusual flight characteristics and operational parameters of objects.

“We need to get to the bottom of this connection between UFOs and nuclear weapons.”

In other news, US Congressman Tim Burchett says that the authorities have covered up the existence of aliens for centuries. Burchett is campaigning to declassify all U.S. government files on sighting reports, as he is convinced that America is ready “for the truth”.

Burchett, 58, said: “I believed in these phenomena for a long time,” he said in an interview with US television talk show News Nation. “I’m a Christian. I am reading my Bible. The first chapter of the book of Ezekiel is pretty clear about UFO sightings.”