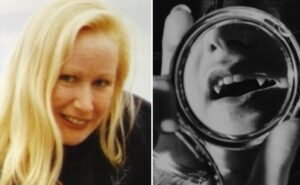 On July 16, 1996, 36-year-old Susan Walsh left her Nutley, New Jersey apartment to use a pay phone across the street – a routine habit since she didn’t have a home telephone. She was never seen again.

20 years later, the disappearance of Susan Walsh continues to be one of the more intriguing missing persons cases in the New York City area.

Working as an exotic dancer since her early-20s and dreaming of becoming a writer for as long, Walsh had been using her contacts and experience in New York City’s seedy underbelly to break into the world of investigative journalism.

In the weeks prior to vanishing, Walsh had been working on an article for the Village Voice regarding the growing popularity of Manhattan’s underground vampire community, an article ultimately rejected for being too subjectively sympathetic of its subject.

Around the same time, Walsh told close friends she feared a stalker was after her, but wouldn’t divulge any further information for fear of endangering them.

In the two decades since her disappearance, many theories regarding what happened to Susan Walsh continue to churn, but one ranks most disturbing: did Walsh get too close to a New York City vampire cult, and pay with flesh and blood as a consequence? 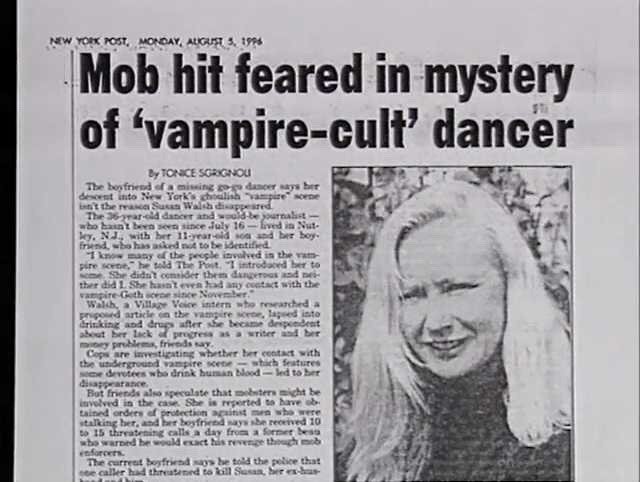 As is routine, investigators initially questioned whether Susan Walsh had simply left on her own. If so, there was little for them to do besides attempt to locate her and make contact.

However, interviews with friends and family quickly put this theory on ice; Walsh was a doting mother to her only son and highly protective of him. Leaving behind the most important person in her life seemed out of character.

Next up for detectives was determining what circumstances may have led to foul play, and naturally their first focus was on those closest to Walsh. At the time she vanished, Walsh had been living with a male friend of hers, meanwhile her ex-husband and father of her son lived in the apartment beneath her own.

Strangely, the page for the month of July had been ripped from Walsh’s planner, intensifying focus on the roommate and ex-husband. However both men were eventually cleared of suspicion by police.

Almost immediately after the disappearance of Susan Walsh, author and clinical vampirism expert Katherine Ramsland decided to dive into the New York vampire scene in an attempt to uncover what happened to the missing woman.

Her book on the matter, Piercing the Darkness, Undercover with Vampires in America Today, published in 1998, provides an examination of the vampire underground as a whole – in a sense fulfilling what Walsh had set out to do prior to her disappearance.

Even back in the 1990s, Ramsland was able to identify the internet as the emerging game-changing resource for subcultures like the vampire community. She notes the web as being a nexus for planning vampire gatherings in the real world, as well as providing the stage for enacting anonymous virtual vampire fantasies online.

Several of the character-contacts she meets and interviews initially reached out via the internet, though none of these individuals provide any help with learning the fate of Susan Walsh.

Perhaps they occasionally dabbled in consensual blood sharing, blood consumption, and various fetishes – but nothing more. If Susan Walsh was a victim of an underground vampire conspiracy, Ramsland argues, then why didn’t the perpetrators make an effort to prevent herself from digging far deeper than Walsh ever did?

It’s her opinion it’s unlikely a link exists between the New York vampire subculture Walsh was exploring, and the aspiring journalist’s disappearance. Police would eventually draw the same conclusion.

Yet Ramsland doesn’t ignore the fact that the underground vampire community – as harmless as it may be as a whole – seems to benefit from the public perception of being capable of sinister, violent acts.

She highlights several gruesome crimes in recent history committed by individuals either claiming to be vampires or acting like them. It’s entirely possible Susan Walsh gained the attention of such an individual while pursuing her interest in the New York City vampire underground.

Despite initially believing Walsh incapable of leaving her beloved son behind, investigators eventually decided the most likely scenario was that she left on her own.

If she’s indeed alive, her friends and relatives either don’t know it or have no interest in sharing that information with the public and the police. With two decades now passed since the day Susan Walsh vanished, it’s increasingly unlikely the truth will ever see the light of day.