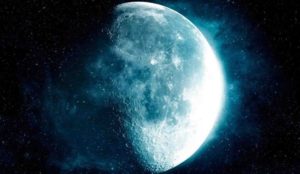 Scientists from Sweden conducted a fairly large study, during which they studied how the moon can affect human sleep. Experts monitored the sleep of 850 volunteers.

Additionally, polysomnography was used in order to record not only the duration of sleep, but also its quality throughout the night. Data were collected over a long period of time not only from men, but also from women, reports Science Alert.

The information received was able to cover several completely different stages of the lunar cycle. Experts have received evidence that these lunar cycles can indeed affect the quality of sleep, but not in all people.

At the same time, there was no particular effect on women’s sleep at this time. During the waxing moon (waxing crescent), women slept 12 minutes less than during the waning crescent.

Sleep quality among men was reduced by 3.4% during the waxing moon, and some disturbances in sleep stages were also observed.

Due to the fact that the study is observational in nature, experts were able to establish a causal relationship. At the same time, several different theories have been proposed at once as to why the Earth’s satellite has such a strong effect on human sleep.

Sleep can be influenced by the force of gravitational attraction, geomagnetic effects. These theories require additional research and have not yet been officially confirmed.