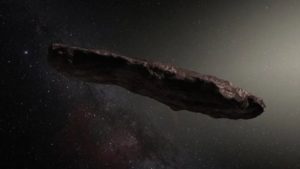 Alien ship? Or a lump of solid hydrogen? Which idea is less reasonable?

Oumuamua – a mysterious interstellar object that flew into our solar system two years ago – may actually be alien technology, reports ordnonews.com.

In 2018, our solar system collided with an object from interstellar space. The object, dubbed Oumuamua, appeared long and slender — in the shape of a cigar. Observations then showed that he was accelerating as if something was pressing on him. Scientists are still not sure what.

The object was propelled by alien technology such as a light sail – which was accelerated by solar radiation. The main proponent of this argument was Avi Loeb, an astrophysicist at Harvard University.

However, most scientists believe that “Oumuamua’s acceleration was probably the result of a natural phenomenon. In June, a team of researchers suggested that solid hydrogen invisibly escapes from the surface of an interstellar object and causes it to accelerate.

Now, in a new article published Monday in The Astrophysical Journal Letters , Loeb and Tim Hoang, astrophysicists at the Korea Institute of Astronomy and Space Sciences, argue that the hydrogen hypothesis is not possible, and there is still hope that we have been visited by advanced aliens – and we really noticed their presence.

When asked if there was an explicit explanation for Oumuamua’s acceleration, Loeb referred to an as yet unpublished book he wrote, Aliens: The First Sign of Intelligent Life Beyond Earth, due out in January