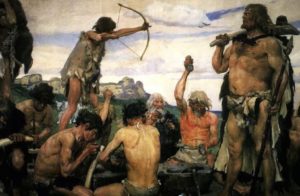 Scientists from the Polish Academy of Sciences said that the ancient people were vegetarians, that is, there was almost no meat in their diet.

The experts made such conclusions after many years of studying the lives of ancient people who lived in the south of modern Poland during the Neolithic. People of that time almost did not eat meat, since basically they preferred to eat plant foods.

Scientists carefully examined fragments of bones of people and animals living in the Neolithic period. The findings were amazing. The diet of ancient people contained dairy products, barley and wheat.

If they had livestock, then only wool, skin and milk were used. There was no meat in the daily diet of ancient people. Such conclusions were made by researchers, having studied human teeth.

Researchers also found that ancient people were vegetarians for about five millennia. Interestingly, scientists came to similar conclusions who studied the diet of people who lived several thousand years ago in Africa. Ancient Africans ate plants and root vegetables, which were baked at the stake.