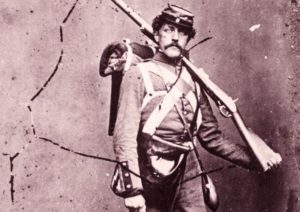 The Haunted Hotel Provincial in New Orleans’ French Quarter is owned by the Dupepe family and has five buildings. The site of the 300 building was used during the 18th century as a medicinal herb garden which grew plants for the nearby military hospital. The house with slave quarters was built in the early 19th century.

The 400 building was constructed in the 1830s and had a shop on the first floor and an apartment upstairs. The 500 building originally belonged to Ursuline Nuns and was the military hospital for American and British Soldiers during the Battle of New Orleans.

It also served as one during the Civil War. This is the most haunted structure and where soldiers from both wars are seen.

In this haunted hotel, confederate soldiers and doctors have been seen wandering the hallways or reaching out to guests for help.

People say they have walked into its room and saw wounded soldiers writhing in pain and moaning, then disappearing when lights are turned on. It’s said that blood stains appear and disappear on bedding and floors.

Soft moans are heard throughout the building. A security guard entered an elevator and, when its doors opened, saw a hospital room filled with wounded soldiers and nurses tending them.

In one case, a woman was staying at the hotel during a visit to watch the St. Charles Avenue Mardi Gras Parades returned to her room from the late night festivities on the French Quarters’ Bourbon Street.

She told a staff member that something unseen grabbed her hand, pulled her from the bed and quickly dragged her across the room. She felt like it was trying to pull her inside of the wall.

A staff member told a couple their room was haunted by a specter who loved country music.

He said that, when a hotel employee opened the door to show guests into their room, they saw a man dressed in a 1930s khaki military uniform with many medals and wearing a cap.

The ghost looked at them, then disappeared. The couple reported that they felt something was watching them and felt chilled. They captured the ghost on film.

Whenever the radio is turned to any station, it mysteriously returns to his favorite one. A séance was held in the haunted room and the specter appeared as a solid person.

He tried to speak while their tape recorders were on. When he was done talking, he disappeared through a wall. The EVP words were to please tell Diane he had to go.

Other EVPs feature a man’s voice saying that he had to leave and she doesn’t love him; she loves another. Films and videos are said to have captured his face or his uniform and medals.

An added attraction for ghost hunters is its paranormal activity. In addition to the haunted 500 Building and the ghostly soldier, phantom whispers, footsteps, moans, groans and voices are heard throughout the buildings.

Spectral women are sighted. Doors open and shut by themselves. There are gelid cold spots and scorching hot spots. Soldiers are also seen on the grounds and in the lobby.