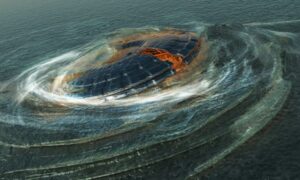 When UFO sightings in the form of “Tic-Tac” dragee are considered, the incidents with the American warships USS Omaha and USS Nimitz are mainly mentioned.

However, there were other ships in the same area, with pilots and crew members who had their own encounters with the Tik-Tac objects, and one soldier recently came up with a new story.

His name is John Baughman. He served in the US Navy from 2008 to 2013, and in 2010 was on board the USS Carl Vinson. The ship was heading towards Haiti, delivering humanitarian aid after the devastating earthquake in that country.

“I was staring into the water from above when a large, fat, white ‘Tic Tac’ object, approximately twenty feet in length, suddenly appeared in my view below me, moving right and darted into the depths as fast as it appeared.

“I couldn’t really comprehend what I saw. It was definitely a solid object, but when it descended, its forward end rapidly collapsed in on itself and disappeared.”

At the time, Baughman was a gunner’s assistant (a position of serious responsibility assigned only to very reliable people) and he had a break, during which he did what all the sailors did during the break, sat on the edge of the deck and looked down at water in the hope of seeing something interesting there.

In a recent interview with UFO researcher Ryan Sprague on Medium.com, Bowman says he expected to see the usual: “Everything from sharks, dolphins and whales to giant squids, sea turtles and swordfish.”

But instead, he saw an unidentified underwater object. A well-trained crew member, Baughman immediately reported the observation to his immediate superior, who simply told Bowman the following: “Everyone sees this kind of weird shit in the ocean.”

At that time, the story of the Tic-Tac UFO sightings by Nimitz pilots, which happened in 2004, had not yet spread in the media, but there was no doubt that these objects were known among the naval personnel, especially crews and pilots of aircraft carriers.

However, the answer of his boss reflected modern philosophy – do not tell anything or anyone about UFOs, otherwise, they will make fun of you or worse.

Even now, a couple of weeks after the Pentagon published a large UFO report, when articles about it appeared in all the world media, John Baughman is still very careful in terms.

He told Sprague that he was not sure what it was, but that shouldn’t stop anyone from reporting the sighting of unidentified flying or underwater objects.

Baughman stressed that during his service on an aircraft carrier, he was used to correctly determining what is in the ocean and at what depths.

Baughman is cautious in his conclusions. “It could have been just about anything,” he says. “Rapidly moving flotsam with a keen ability to completely disappear, very large albino shark or an albino whale. Could even be an optical illusion, but it cast its own shadow and that’s how I was able to perceive it as a solid object.”

As the stigma and ridicule often attached to reporting these anomalous events continues to dissipate, new reports like Baughman’s are going to become more common.