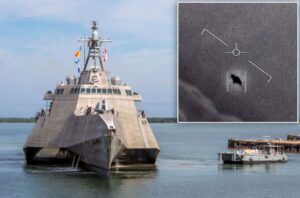 It is currently the last film to be published by research director Jeremy Corbell.

The filmmaker who leaked footage of UFOs swarming a Navy battleship off the coast of California in 2019 has released a pixelated clip of three mysterious lit-up objects flying above the USS Omaha.

Unusual footage was captured in July 2019, when more than a hundred mysterious objects surrounded the US Navy ships. About 14 unknown flying objects (UFOs) were recorded.

In the last video, three objects soar in the sky above the American ship Omaha.

Corbell said that the UFOs were at least 6 feet in diameter and emitted red light.

Jeremy Corbell tweeted that the video was captured from the deck of the American ship Omaha by the VIPER crew.

During that night, at least 14 objects were recorded, and they were clearly not worried about the presence of warships. Many eyewitnesses to this incident believe that UFOs deliberately demonstrated their presence.

The US Department of Defense concluded that these aircraft could not be operated by humans. That is, at least, neither the United States nor its allies can have such technologies.

“What that suggests, I could only speculate… however, these objects have been conclusively determined by our Department of Defense to NOT be owned or operated by the U.S. or our allied entities,” he wrote.