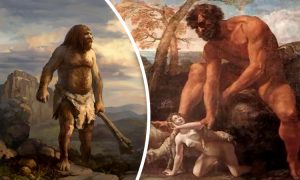 Who exactly were the Nephilim? This area of study stands alone from other paranormal phenomena in that it is one of the few places where Biblical history and ufology intersect.

The word “Nephilim” is a Hebrew word meaning “the fallen ones”, and it is mentioned in the book of Genesis to describe an ancient race of giants that were half-human and half-angel.

According to Genesis 6:4, during the antediluvian (pre-flood) period, giants (translated as “Nephilim” in the actual verse) inhabited the earth, and they were reportedly the product of an intermingling of “the sons of God” (Hebrew: B’nai Elohim) with human beings.

In at least four other places in the scriptures, the phrase “sons of God” specifically refers to angelic beings, implying that the Nephilim were a hybrid race produced from the cohabitation of fallen angels with human women.

The intrusion of these beings into human affairs produced a detrimental effect on mankind, and by many accounts the advent of the Nephilim was the primary reason for the Flood of Noah.

Chapter 6: The fall of the angels

“And when it came to pass the men “muliplied” and brought forth the children of men they brought forth beautiful daughter and the angels of heaven began to Lust fall in love with the women on earth saying: let us have children with these women and let them be our wives. and Semjaza(sam-ay-ell) was their leaders.

Chapter 7: The birth of evil

“They taught mankind many things, from charms, enchantments and the cutting of roots and made them aquainted with plants. And the women became pregnant and bore great “giants” who’s height was of three thousand ells. (gods some say) who consumed all the aquisitions of men and soon when man could not longer sustain they the “giants” turned against them and devoured mankind. “

According to Enoch’s account, the Nephilim began to wreak havoc on the earth, dominating the affairs of men and consuming resources to an unsustainable degree.

Some ancient writings have hinted that the Nephilim may have enslaved human beings in order to feed their colossal appetites, and when the humans simply couldn’t produce enough food or resources, these massive beings would engage in cannibalism in order to satisfy their appetites.

Ancient accounts paint the Nephilim as extremely violent and sexually perverse, which more than likely triggered the judgment of God by way of a worldwide flood. Several Bible scholars assert that Noah was chosen by God to continue propagating the human race because his bloodline had not been tainted by the Nephilim.

The scriptures allude to this in Genesis 6:9, where it mentions that Noah was “perfect in his generation”; in this verse, the word “perfect” in Hebrew is translated “without blemish.”

Interestingly enough, these strange events have been echoed in the myths and legends of every ancient culture on the planet, including the Egyptians, the ancient Greeks, the Hindus, the American Indians, the South Sea Islanders, and practically all the others as well.

Some researchers have speculated that the Nephilim may have been involved in the building of many of the ancient megalithic structures such as the Great Pyramid and Stonehenge, since the technology needed to accomplish such feats of engineering could not have been relegated to mere human tools and effort.

The writings in the Book of Enoch also suggest that these fallen angels were responsible for teaching men advanced knowledge such as astronomy, sorcery, mathematics, metalworking, and masonry, a concept that is highly suggestive in light of the fact that many features of these ancient megalithic structures display a sophisticated degree of architectural and engineering knowledge.

The 5,000-year-old Sumerian culture, which is responsible for the invention of the first known written language as well as the basic principles of mathematics, attributed their knowledge to beings they called the “Annunaki”, who were described in their ancient writings as “sky gods” that came down to earth and imparted this specialized information.

Genesis Chapter 6 also gives the impression that the bizarre events surrounding the flood of Noah were not confined to that period of time only; verse 4 mentions that giants were on the earth during the days of Noah, but “also after that,” meaning that these bizarre beings emerged in later times as well.

This is confirmed by Numbers 13:33, when the twelve Israelite spies returned to give Moses their report after spying out the land of Canaan: “And there we saw the giants (Hebrew: nephilim), the sons of Anak, which come of (or, are the product of) the giants (nephilim), and we were in our own sight as grasshoppers…” Evidently, these giants were extremely physically intimidating.

Several other scriptures confirm various tribes of giants whom the nation of Israel encountered, such as the Emim, the Horim, the Rephaim, the Zamsummim, and the Anakim (which produced the infamous Goliath and his four brothers). In addition, Deuteronomy 3:13 describes a king named Og who ruled a territory known as Bashan, also referred to as “the land of the giants.”

According to Biblical as well as extra-Biblical texts, the Nephilim were commonly described as having these characteristics:

* They were typically two or three times the height and size of normal men.
* They were the result of an intermixing of humans and angels.
* They were commonly associated with the Canaanite culture after the Flood.
* They often had polydactyly (additional fingers and toes); Goliath was described in 2 Samuel 21:20 as having six fingers on each of his hands, and six toes on each of his feet. Other accounts of this race of giants describe them as having two rows of teeth on their top and bottom jaws.

There have been several accounts of archaeologists as well as various laymen unearthing skeletons of these giants all over the globe. In the 1920s and 1930s, an amateur archaeologist by the name of Ralph Glidden excavated dozens of giant skeletons on a small island off the coast of California known as Catalina.

Glidden unearthed thousands of Native American skeletons in his expeditions as well, and according to an article in the Los Angeles Times dated November 6, 1932, “Practically all male adults he [Glidden] found to have been of gigantic stature averaging around seven feet in height.” It is interesting to note that tales of giants are replete in Native American folklore.

The famous cowboy “Buffalo Bill” Cody related in his autobiography that the Native Americans he encountered described a legend of a “race of giants” that inhabited the Pawnee Indian territory of South Platte (Colorado).

These giants were reportedly “three times larger than normal men and able to out-run a buffalo, and even carry it in one hand.” Some researchers claim that the common Native American greeting in which they raise their hand and say “How” was originated as a way to prove that they had a normal human hand instead of a hand with extra fingers.

The way in which the legends of the Nephilim and UFO phenomena intersect is particularly interesting. Countless reports of alien abductions depict situations in which human victims are taken aboard alien spacecraft and forced to assist in some type of reproductive process with alien entities in order to create alien-human hybrid creatures.

Dr. John E. Mack, a Pulitzer Prize winning Professor of Psychiatry at Cambridge Hospital (Harvard Medical School), has been personally involved in analyzing over 100 alien abduction cases, and he has reported that the majority of cases involve some type of agenda to develop a hybrid race. This agenda sounds eerily similar to that of the fallen angels as depicted in the various ancient writings.

Could it be that the Nephilim are still active in the earth today? Are the aliens of today the same creatures as the Nephilim of ancient times? These questions have staggering implications, and although the subject of the Nephilim is rife with speculation and conjecture, one thing that can be agreed upon is that it continues to merit serious research and investigation.