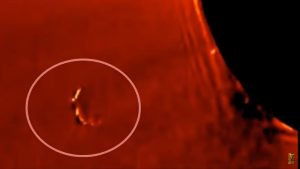 Solar Observatory (SOHO) NASA has filmed a real anomaly near the Sun. Ufologists are sure that the video is 100% proof of extraterrestrial life.

As can be seen in the footage, in the near-solar space there is a massive object that remains in place for a long time. It constantly moves, ignoring solar flares, etc.

Scott Waring, a famous ufologist, was not surprised by the newest video. According to him, there are a lot of similar extraterrestrials spaceships in space.

Record US military budget provides for the study of UFOs

Today, an asteroid will make one of the closest approaches to Earth