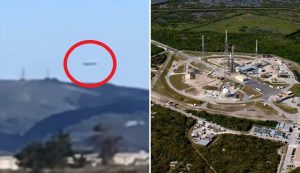 The video below was taken on February 8 of this year in the Santa Barbara district of the US state of California, not far from the Vandenberg military air base, equipped with its own space center.

The video shows an unidentified, cigar-shaped flying object floating slowly over the horizon. According to the surprised operator, he noticed this UFO quite by accident and immediately tried to shoot it on the camera of the smartphone.

At first, an eyewitness considered that it was an ordinary airship, but then the observer realized that he was mistaken. The fact is that at a certain moment the mysterious object approached directly to the top of the hill, where the transmission lines stand.

Obviously, no airship will fly so close to the wires. But UFOs often end up in places with powerful electrical installations: as if they are powered by a network.

Many ufologists on the World Wide Web also believe that this is not about a balloon, but about a metal aircraft of impressive size. Maybe the Vandenberg airbase interested representatives of an extraterrestrial civilization? Or is it the US military testing here such an unusual device, created, perhaps, using alien technologies?

However, there is more talk and conspiracy assumptions about US alien technology than real facts.