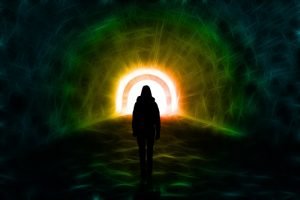 On a September night in 2016, Leni suffered from a severe migraine. She tossed and turned in bed and tried to decide whether to take another painkiller pill or still endure the pain.

The woman rolled over on her other side in an attempt to sleep and was struck by the bright light that suddenly burst into the bedroom.

At first Leni thought it was the light of a passing car and looked at the curtains, but they were tightly curtained. In the golden light, Leni saw a tunnel that led into a golden room, invisible from this side. The energy emanating from the tunnel was enveloping in love and kindness.

“I was lying in bed in a good deal of pain from the migraine. I was trying to decide whether to take more aspirin or let my body heal it. I rolled over to try to sleep and light was cast into my bedroom.

“I thought that it may be a car passing by so I looked at my curtains to see if they were still closed. They were and I could see this beautiful golden light and tunnel that I knew was attached to a golden room even though I could not see the room. This tunnel was so loving and kind.

“I don’t know how to explain this other than to say that the tunnel was me. The energy emanating from the tunnel was so peaceful. All of my pain from my migraine was gone. I didn’t quite leave my body but I felt a weightless sensation like I could go back and forth with my thoughts even though I was still lying on the bed.

“I asked my Spirit Guides if this was it. If this was MY light and MY tunnel. They nodded excitedly. There was no judgement regardless of what my choice would be.

“I really wanted to go further into this tunnel but if I went into it any further I knew that I would not be able to stay on Earth. I have never felt peace like this. This peace was so strong that it almost felt physical.

“All of a sudden I could see a golden being. Like a golden man with a long golden beard. He seemed to be standing at a podium with all of my deceased loved ones behind him. They so longed to be with me and to comfort me. Their faces were so loving. Next, I was in a huge stadium.

“There were souls all around me but behind a barrier. It was pure pandemonium. I could not figure out why they were so excited. Like who they were waiting to see. It was like when you see the Beatles and all the fans are screaming to get close to them. All these souls were screaming and excited to get close to….me! I could hardly believe it. They were so proud of me for coming to Earth.

“And I realized they were waiting for me to write my name in the halls of celebration of those who came to Earth. It is so hard here that we will all be acknowledged for coming here. I felt incredible shame in that moment.

“They regarded me as a hero and I have hated most of my life here. I have complained through most of my life. All of a sudden and before I could reach the place to sign my name in the Great Hall of Life, I knew that I could not do this and stay there. I began to slide back very slowly.

“I would have been extremely upset to leave this dimension (it was in my bedroom but also another dimension, very weird), had I not wanted to stay on Earth. I sat in awe of what happened and the golden light stayed in my room and kept it lit up for about 30 minutes. I basked in that glow and felt the love and peace until I fell asleep. I shall look forward to death from then on, it was so very wonderful.”