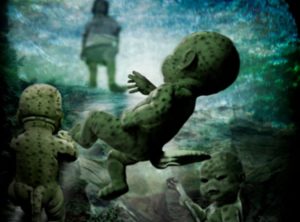 This beautiful lake with natural stone formations has been the continuing source of two very different legends throughout the years. The first of these concerns the Water Babies.

The Myth of the Water Babies of Pyramid Lake

It may simply be coincidence, but almost every spring an unlucky angler disappears while trying to catch a record-sized cutthroat trout. Their bodies are seldom recovered. Some attribute their disappearances to the 350-foot depth of the lake, while others blame the Water Babies.

What are the Water Babies? Since no one has ever lived to tell the tale (according to local folklore) it all depends upon whom you ask. It’s been established that before the white man arrived at Pyramid Lake, members of the Paiute tribe threw ill-formed or premature babies into the water. The tribe felt this a necessity to keep the tribe strong in the harsh desert environment.

According to this first version of the legend, the angry spirits of these cast-off infants took hold of the lake over the centuries. Now, nearly every spring, they take revenge upon unlucky fishermen.

The Paiute Legend of the Water Babies

The Paiutes who live near the lake tell a different tale. According to staff members at the Pyramid Lake Paiute Tribe Museum and Visitor Center, this story began with a family vacation to the California Coast.

While there, a Paiute boy met and fell in love with a mermaid-like creature. He was determined to marry her, and brought her home to Pyramid Lake to meet his tribe members. They insisted that he take her back to the ocean, but before they left, the rejected creature put a curse on the water.

Shortly afterward, two sisters were washing clothes in the river. One sister had a small infant whom she left in the shade of a large tree while she did her chores. Unnoticed by the adults, a serpent emerged from the river, eating the child and taking on its form.

When the mother went to feed her child, the demonic infant began to devour the young mother. When the sister and other tribe members couldn’t make the baby release its grip, they called for a Medicine Man. A fateful deal was made: the demon would be free to inhabit the lake if the young mother was restored to health.

Mythbusters and ghost hunters are reportedly baffled by paranormal presence looming over Pyramid Lake. People have reported hearing the dejected cries of an invisible baby, or the laughter of phantom children. Pyramid Lake natives say that the noises are bad omens. “If you hear it, it’s bad news; if you see it, you’re dead!”

Obviously, if the beauty of this lake may be a siren call, perhaps it would be best to view it from a distance and then simply move on. Or perhaps you would rather visit Stone Mother?

One day the father of all Indians came to this area and lived on a mountain near stillwater. It is said that he was created near Reese River. He was a very great and good man. He was very lonesome and wished he had someone to keep him company.

One day, much later, Woman heard about man. She was married to Bear. She wished that someday she might see Man, and this made Bear very jealous. One day Woman and Bear had a fight. They fought for a long time and finally she knocked him down and killed him with a club. She decided to leave the country and go north in search of Man. She had many interesting experiences on her trip.

Even today, her footprints can be seen along Mono Lake.

Near Yerington, she fought a giant who tried to eat her. She managed to kill him and his body turned to stone, where it can also be seen today.

She arrived at Stillwater Mountain at last. There she saw Man who was so handsome. She hid from him in for fear he might leave. One day, as Man was walking around he saw Woman’s tracks. He started to look for her, and called out, saying that he knew she was around.

At last she came out from hiding. She was nervous and very tired from her trip. He noticed this and spoke to her kindly. He asked her to go with him to his camp where he would give her food. She meekly followed him.

After they finished eating, Man asked Woman to stay with him. That night she stayed near the fire. The next night she slept by the door. Each night she moved a little closer. On the fifth night they were married. They had many children.

Their first-born was a boy who was very mean. He was always causing trouble among the other children. One day when they were fighting, the father called the children together to talk to them. He told them that if they continued to fight he would have to separate them. They started fighting before he finished talking.

Man became very angry. He stopped them and said, I am going to separate you now. I shall go up to my home in the sky. When you die you will come up to me. All you have to do is follow the dusty-road (pointing to the Milky-Way). You will reach my home where I shall be waiting. Some day I hope that you will all come to your senses and live together in peace

Slowly he called the oldest boy and gave him one of the girls. He sent them west. They became the Pitt-Rivers. The other children who were peaceful, he kept at home. He told them that they were to take good care of their mother whom he was leaving with them. They became the”Paiutes”. Then he went up into the mountains then up to the sky.

The Paiutes grew into a strong Tribe, but woman still grieved for her other children. Woman was so sad that she began to cry bitterly. She missed her other children very much. She cried more and more each day.

One day she decided to sit near a mountain where she could look toward Pitt River country. She sat there day after day crying. Her tears fell so fast that they formed a great lake beneath her, called “Pyramid Lake”. She sat so long that she turned to stone. There she remains to this day, sitting on the Eastern shore of Pyramid Lake, with her basket by her side.

So here we have two different local Paiute legends, both having to do with Pyramid Lake and mystical occurrences. The Water Babies still cry out to visitors to this day, and spirits of children can be heard laughing in the silence surrounding the lake.

Ghost hunters have no explanation for this paranormal activity. The last thing you ever want to see would be the Water Babies, the Paiute warn you and as the missing fishermen would probably attest. Stone Mother still sits by the lake with her basket, pining for her family. Both are eerie tales and both are familiar legends to those who live in the area.