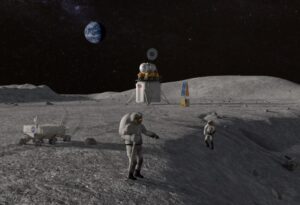 The schedule of the project for the conquest of the moon by American astronauts has once again been adjusted.

If a man returns to the moon, it will not be in 2024. NASA has acknowledged the inability to meet the schedule of the Artemis III mission due to financial and technical problems.

The coronavirus pandemic, which in the spring of 2020 forced the suspension of a number of businesses around the world, also affected the pace of implementation of the Artemis program, which should return humanity to the lunar surface.

The first mission of Artemis I planned for 2020, has already been postponed to 2021, and Artemis II, during which it is planned to fly around the moon on the ESM with a crew on board, has been postponed until at least 2023.

At the same time, the Artemis III mission planned for 2024, which should end with the landing of astronauts on the lunar surface, was not previously postponed, but now it became known that it would not take place on schedule.

According to NASA Inspector General Paul Martin, the schedule is already at least 20 months behind due to financial and technical difficulties.

It was expected that by November 2024, NASA would have at its disposal two new xEMU (Exploration Extravehicular Mobility Unit) spacesuits completely ready for the expedition, but it was not possible to meet the deadline – the equipment would be ready no earlier than April 2025, and by that time NASA would have spent more $ 1 billion for the development and assembly of next-generation spacesuits.

NASA stressed that they did not abandon their plans and would return the Americans to the Earth satellite, but a little later.