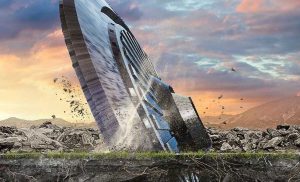 You might think that humanity’s best chance of finding alien life involves peering deep into space and analysing faraway galaxies.

But a NASA study has suggested the truth about extraterrestrials could be lurking right under our noses.

Dozens of space scientists have teamed up to explore how our species could detect ‘technosignatures’, the name for pieces of evidence which give away the presence of advanced alien civilisations.

Some of these tell-tale signs are obvious. For instance, if loads of radio waves are detected coming from a distant star system, then it could be a clue which shows it’s inhabited by intelligent extraterrestrial organisms.

We could also search for alien societies by looking for ‘megastructures’ called Dyson Spheres, which are theoretical power stations built surrounding a star to harvest its energy.

These would be easy to spot because they are likely to be gigantic and block out starlight whenever they pass in front of their sun.

Other technosignatures are harder to identify, such as evidence that a planet has been polluted by heavy industry.

In the new report, scientists also make the fascinating suggestion that our own planet may be hiding alien ‘artefacts’, some of which may even have been built by extinct civilisations which lived on Mars, Venus or even Earth.

‘Because the geological, paleontological, and archaeological records on Earth are so incomplete, it is even possible that the Earth itself hosts such artefacts, although, again, this idea is often conflated with unscientific popular imaginings and science fiction stories about alien visitation, and so must be approached carefully,’ researchers wrote.

‘If technosignatures were discovered in the solar system, it would be worth considering whether their origin might not be interstellar.

‘Specifically, since the Earth is home to the only known species capable of interstellar communication and planetary travel (although both technologies remain in their early development), the Earth remains the only known planet fecund enough to promote technological life, and so it or an early, habitable Mars or Venus could even be the origin of such technology.’

So far, our species has only spotted one potential alien artefact, although most scientists believe its origins are natural rather than artificial.

A comet or asteroid or alien spaceship called ‘Oumuamua sped through our solar system in 2017 at high speed. It was the first ‘interstellar visitor’ to be observed in our stellar neighbourhood after traveling here through deep space.

It changed direction as it passed the sun, which may have been caused by a natural process called outgassing – although there is a very slight chance this could have been the result of it being steered somehow.

Some scientists suggested ‘Ouamuamua was an alien probe, whilst others went on to suggest our solar system could be full of similar extraterrestrial spacecraft.

Sadly, the consensus is that it was a comet ejected from a farway star system and sent on a long journey through the void.

In the latest study, scientists added:

The research is collected in a paper called ‘Nasa and the search for technosignatures: A Report from the NASA Technosignatures Workshop’.