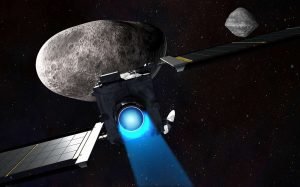 NASA said a spacecraft that crashed into a small asteroid millions of kilometers away managed to shift its orbit.

Two weeks ago, the space agency made an attempt to find out if a killer stone could be removed from the Earth’s path in the future.

“This mission shows that NASA is trying to be prepared for whatever the universe throws at us,” NASA Administrator Bill Nelson said during a briefing at NASA Headquarters in Washington.

On September 26, the DART spacecraft blasted through a crater in the asteroid Dimorphos, ejecting debris into space and creating a comet-like trail of dust and rubble several thousand kilometers long.

That changed its orbital period by four percent, or 32 minutes—from 11 hour 55 minutes to 11 hours 23 minutes, bettering an expectation of 10 minutes.

It took weeks of observations by telescopes from Chile and South Africa to determine how much the collision changed the trajectory of the 160-meter asteroid around its companion, a much larger cosmic body.

Not a single asteroid has posed a threat to the Earth, and still does not, as they continue their movement around the Sun. That is why scientists chose them for the world’s first attempt to change the flight path of a celestial body.

“We’ve been imagining this for years, and it’s really exciting that this is finally a reality,” said NASA Program Scientist Tom Statler.

A spacecraft the size of a vending machine launched last year was destroyed in an asteroid impact. It took scientists two weeks to find out if the spacecraft could influence the trajectory of the cosmic body.

“At some point in the future, if we find an asteroid that is threatening to hit Earth, and would be large enough to really do some damage, thank goodness that we will have had this successful test,” NASA chief Bill Nelson announced told AFP.