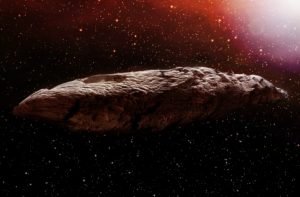 American and British scientists from the research organization Initiative for Interstellar Studies created the Project Lyra program to study the asteroid ‘Oumuamua in detail.

According to their version, the probe, which will be launched in 2028, will catch up with the target in 26 years.

The device will be able to take pictures, with the help of which it will be possible to understand that this is an alien ship or an ordinary wandering space boulder.

Back in 2017, an object called Oumuamua flew through the solar system. It flew very far and very fast, so astronomers could not investigate it, and for five years now they have been scratching their heads – is it an alien ship or an asteroid.

An incomprehensible guest, moving at a speed of 100 thousand kilometers per hour, rushed towards the Sun and was noticed by astronomers from the University of Hawaii.

Astronomers from various countries have calculated its trajectory. It is hyperbolic, which suggests that the mysterious object is moving from somewhere else. The translation from the Hawaiian Oumuamua literally sounds like “the messenger who came first from afar.”

The shape of the object did not resemble an asteroid and its behavior was strange. It did not fly along a ballistic trajectory, but accelerated at times, as if someone turned the engine on and off.

The scientists recalled the science fiction novel Rendezvous with Rama, written by Arthur C. Clarke. He was describing an object that had also appeared in the solar system and was spotted by the Space Patrol. This time something similar happened in reality.

They also believe that Oumuamua reflects too much light, which means it is not made of stone and dustless like an asteroid. Karen Meech, a researcher at the Hawaiian Institute of Astronomy, said the object has a complex metallic shape, characteristic of interplanetary spacecraft.

Avi Loeb, an academic professor of astronautics, insisted that ‘Oumuamua was an unmanned ship or a damaged reconnaissance probe.

Now Oumuamua is flying to Pluto, and earth vehicles can reach it, the main thing is to choose the right time and the estimated speed of 133,200 kilometers per hour.

The launch is planned for 2028 and in 26 years the probe will see Oumuamua, take photographs and send them to Earth. The mystery will be revealed in 2056 if NASA supports the program of scientists.

On the planet supposedly suitable for life found water