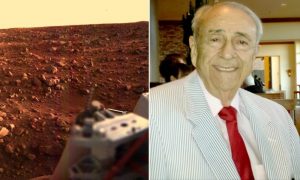 Former NASA employee Gilbert Levin said that more than 40 years ago, traces of life were discovered by scientists on Mars. This was reported by Scientific American.

This study was conducted in 1976 as part of the implementation of the Viking program. At that time, scientists searched for traces of life in Martian soil.

The scientist said that back in 1976, NASA recorded the so-called “microbial respiration”, as evidenced by the high oxygen level in Martian soil.

At that time, the scientist recalls, NASA decided that the received samples of Martian soil could indicate the presence of substances that mimic biological life.

According to Levin, the existence of life on Mars (at least in the form of microorganisms) was later proved by other descent vehicles, especially when traces of water, and then the remains of certain organic molecules, were discovered on Mars in 2000.

It is curious that the new device, which NASA plans to send to Mars in 2020, will no longer conduct tests to detect traces of life on Mars.