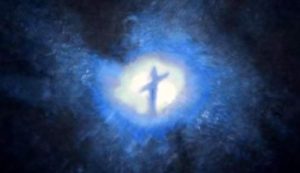 Ufologists looking at the pictures taken by the Hubble Space Telescope unexpectedly stumbled upon something strange. The image was taken in June 1992 by a camera for observation in a wide range of waves on board the famous automatic observatory.

A mysterious photo shows a nameless galaxy, located in 1100 light years from the solar system. It is amazing, but in its very center a certain dark X-shaped figure is clearly visible, resembling a cross or an anthropomorphic silhouette.

Because of this, many Christians on the Internet thought that we were facing a real religious sign, and some even called the distant galaxy “the gate to paradise”. Such commentators believe that this is the silhouette of a Savior crucified on a cross.

Other are convinced: this is about the activities of representatives of extraterrestrial civilization, and, perhaps, Hubble captured an alien mega-structure of astronomical proportions 27 years ago.