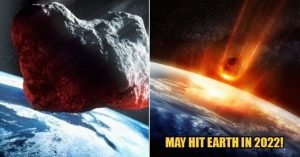 NASA scientists issued an emergency warning – an asteroid is flying to our planet, the size of which is comparable to the Egyptian pyramid. Experts call this object the most dangerous since the time of the dinosaurs.

Astronomers have provided the exact date that a city-killer asteroid the size of the Great Pyramid of Giza could potentially smash into Earth. At its current trajectory, JF1 would do a fly-by of Earth on May 6, 2022.

The asteroid has a diameter of over 420 feet or roughly the size of the Great Pyramid of Giza in Egypt.

NASA said that if JF1 continues at the current trajectory, it could strike Earth “with a force of 230 kilotonnes” – which is equivalent to 230,000 tonnes of TNT (explosives).

Considering the size and the speed in which this rogue space body is travelling, a collision will wipe out an entire city and will kill millions of people in a fraction of a second. If it hit “the remotest part of the Pacific Ocean”, it could still cause natural disasters like tsunamis and nuclear winter.

In order to combat such a scenario, space agencies like NASA, in collaboration with private space companies like SpaceX are busy developing a planetary defence weapon to change the trajectory of an approaching rogue body.

The Metaverse can change reality as we know it