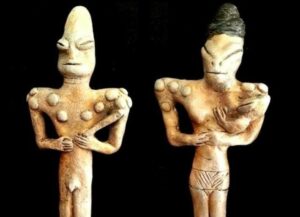 Some appear to be sporting helmets, while others simply have shoulder padding. Still, other figurines were found to be holding a scepter or staff and some of the female statues are breastfeeding or holding their young, which, by the way, have reptilian features as well.

With their long heads, almond shaped eyes, elongated tapered faces and lizard-like noses, one can’t help but wonder why they were so important to the Ubaidian people. 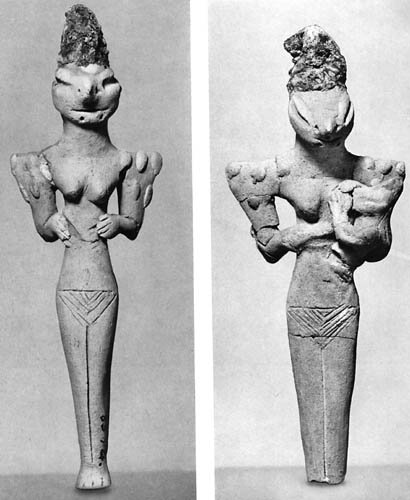 We know that the serpent was a major symbol in many societies to represent any number of Gods, but according to many archaeologists these lizard-like creatures were not worshipped as gods, so that, of course, leads us to wonder what exactly do they represent?

One of our researchers looked into the matter and found an interesting theory.

We know that the Hopi Indians of northern Arizona have stories that date back hundreds of years and speak of their “Snake Brothers” building underground cities in Arizona, Mexico, and Central America.

In addition, the Toltec Mayan God in Gucumatz was often referred to as a “serpent of wisdom,” who played a role in enlightening human beings.

The Cherokee and other Native American peoples also have tales that refer to a race of reptiles. It therefore would not be a big stretch of the imagination to think they could have done the same in other parts of the world.

In India, a few of their scriptures and legends speak of the Naga, who are reptile beings that live underground, often spending time with humans. Indian texts also refer to a tribe of men called the “Sarpa,” a reptilian race who appear with snake-like noses and serpentine legs.

In Japan one could hear tales of the Kappa, a reptilian humanoid. There is also evidence of a reptilian race in the Middle East where the statues were found, along with reptilian-like people who range from Jinn to dragons and serpent-men. In the lost Book of Jasher, a serpent race is described in some detail.

Hearing about these statues reminds many of an article that appeared in the January 27th edition of the Los Angeles Times. The headline being, “Lizard People’s Catacomb City Hunted!”

The story tells of a lost city of catacombs filled with incalculable treasures and records of an advanced race of humans. G. Warren Shufelt, a geophysicist and mining engineer became obsessed with unearthing the lost city below Fort Moore Hill and hoped that by doing so, the secrets of the Lizard people would be revealed.

Mr. Shufelt believed that lying in the catacombs were tablets made of gold containing information proving to be invaluable to the human race, as The Lizard People were of a much higher type intellectually than modern human beings. He believed so deeply in this that he drove a 250 foot shaft into the ground.

Using radio X-rays, Mr. Shufelt mapped out what he believed to be the pattern of the catacombs and their vaults of the lost city.

Large rooms in the domes of the hills above the city of labyrinths housed 1000 families “in the manner of tall buildings” and imperishable food supplies of the herb variety were stored in the catacombs to provide sustenance for them for great lengths of time as the next fire swept over the earth. 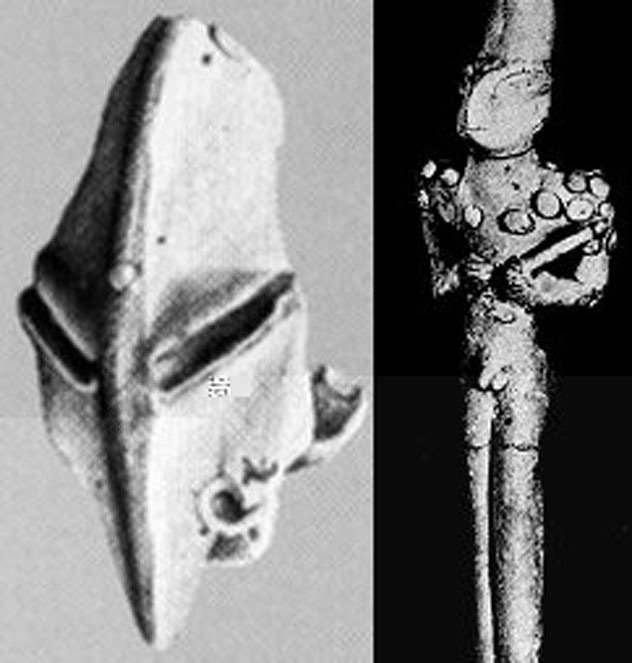 He didn’t become convinced that the maze of catacombs once belonged to the Lizard people until he met with Little Chief Greenleaf in the medicine lodge of the Hopi Indians.

Once Chief Greenleaf told Mr. Shufelt about the lizard people, he was convinced that he’d found one of their underground cities. In fact, after studying the pattern of the catacombs, Mr. Shufelt noticed that the city itself resembled a lizard.

Legend has it that the Lizard People had one key room which was a directory to all parts of the city. In addition, the legend states that all the records of the city were to be kept on gold tablets measuring four feet long and fourteen inches wide.

While mainstream science scoffs at the idea of a race of Reptilians, they are unable to come up with a better theory to explain these 7,000 year old reptilian statues. Those of us who think out of the box already consider most of the mystery solved.