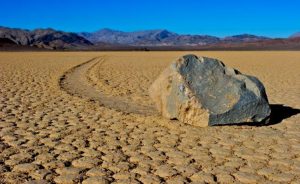 Racetrack Playa located in Death Valley is the site of a mysterious phenomenon in geology where rocks slide in long tracks cross the valley floor without any help from people or animals of any kind. 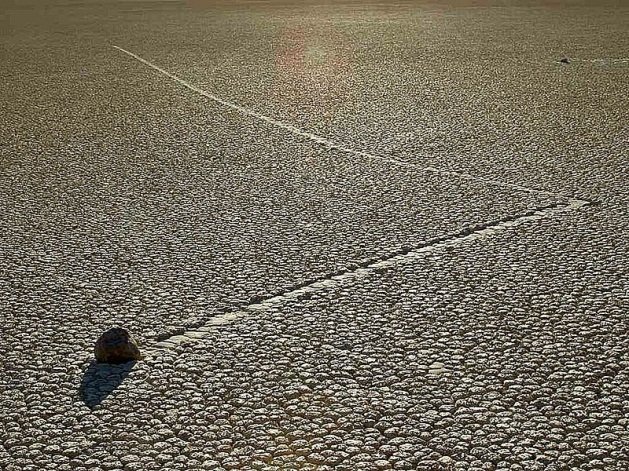 These stones originate from a hillside which is 850 ft.-high made out of dark dolomite. Some of the rocks are from other slopes. The tracks are often tens or hundreds of feet long and they are about 3 to 12 inches wide and they can be about an inch deep.

The stones seem to only move every two to three years and the tracks develop at about three to four years. In some cases the stones turn over and the direction they travel can be different just as right to left or even back to where they originated from.

In 1948 geologists Allen Agnew and Jim McAllister mapped the bedrock in the racetrack Play area and noted the tracks of the rocks.

In 1972 Dwight Carey and Bob Sharp began to monitor the movement of the lay rocks. Thirty stones were marked and their movement monitored. These stones were all given names and the position of the stones was recorded over a seven-year period.

In the summer none of the stones moved and in some winters a few or no stones moved. During the seven year study every stone except for two moved at some point. One stone at 2.5 inches called Nancy moved 860 feet and the largest stone to move was 80 pounds. 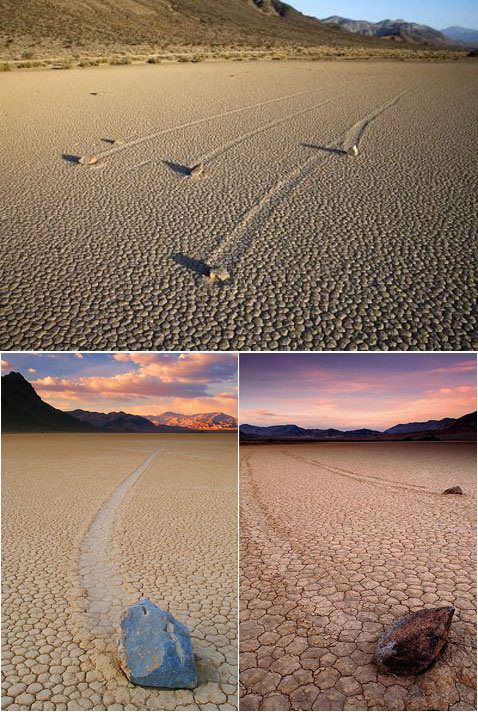 It’s said that several conditions need to exist for the stones to move which are:

Other theories are that the movement is supernatural in nature but this has never been proven. Some geologists such as George M. Stanley wrote a paper in 1955 stating that the winds weren’t strong enough at racetrack play to move the stones.

One stone named Karen is 700 pounds which is the largest. Just before 1994 this stone seemed to disappear and there was no sign of anyone taking the stone as this would have damaged the tracks and the Racetrack Play and be noticeable. The stone went missing for over 2 years before it was discovered again in 1996.

It’s said that ice and strong winds are the main forces behind moving the rocks of racetrack player. In 1995 physicists studied the phenomenon and found that wind gusts on the rocks which can reach 90 miles per hour in this area are intensified and compressed on the playa surfaces causing the rocks to move.

While these theories might explain the movement the Racetrack Playa rocks it is likely to remain a mysterious phenomenon simply because no one has ever witnessed the event. Perhaps someone will capture the stones moving on film. Until then theories that are unobserved or untested are in fact hypotheses or a best guess.