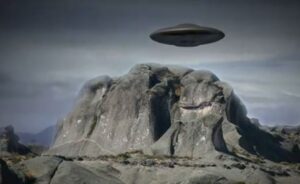 Marcahuasi (Markawasi) is located on the mountain range that rises to the right bank of the Rímac River nearly 4,000 meters high in Huarochirí Province, east of Lima, Peru. This plateu is home to a various set of huge granite rocks with unusual shapes resembling human faces, animals, and religious symbols.

There are many theories as to their origins. There is also a collection of ruins on the north side of the plateau. Over 50 structures still stand in varying states of decay. There are also what appear to be burial tombs on the outskirts of the settlement.

The plateau is shrouded in mystery at many levels. There is even disagreement as to the derivation of the name Marcahuasi (Markawasi). Daniel Ruzo states that the name is relatively recent and means “two-storied house,” referring to the stone buildings (which Ruzo regards as Inca military garrisons) found on the plateau.

In contrast, Lisa Rome states that marca in Quecha means the land belonging to a community, and huasi means town, so the name Marcahausi refers to the land for the town or entire community, and from this etymology she suggests that the plateau was communal religious center for the surrounding area.

She states that there is are no Inca remains to be found at Markawasi, dating many of the structures to the thirteenth and fourteenth centuries A.D. Others have tentatively dated some of the buildings to a good five hundred or more years earlier.

Local people say nothing about who the builder were, where the figures were made or quite possibly more important — where were they from. Yet still an extraordinary energy pervades this sanctuary cloaked in the clouds for untold centuries, having only recently been discovered by the outside world. In this place, many reports of UFO’s being seen, as well as strange beings who reportedly walk around the place day and night.

The local people believe these beings come from inside the earth or are materializing from other dimensions. The archaeological community is at a loss to explain some of the more unfathomable images carved in the stone.

Supposedly they created monumental carvings from the granodiorite cliffs, boulders, and outcroppings on the top of the plateau – carvings of an anthropomorphic and zoomorphic nature, including peoples of many different races and animals found not just in the immediate vicinity, but from other continents as well.

There was even an alleged sculpture of the Egyptian divinity Ta-urt (Thoueris), goddess of childbirth and maternity, in her typical form as an upright female hippopotamus. If these reports were true, this would indicate a pre-Columbian culture that had transoceanic ties, and just perhaps it represented a branch of the primordial global lost civilization of which many writers and philosophers have speculated over the centuries.

In addition to toads, dogs and condors which are all indigenous to the area, there are also 25-foot tall carvings of a walrus, camel, lion, polar bear, alligator, turtle and what can only be described as a prehistoric stegosaurus dinosaur! These and other creatures haunt this mist shrouded plateau from a lost world.

There is a3-story tall human head carved from a single bolder and faces carved on a cliffs that drop thousands of feet representing all the different races of the world, speaking in muted silence of the many questions permeating these stones resting upon the Markawasi plateau. So what are the meaning of structures, the monuments, the gigantic megalithic sculptures, found at Markawasi?

Dr. Robert M. Schoch interpret the monuments of Markawasi as incredible simulacra – that is, in this case, natural objects that in the mind’s eye take the shape of forms of other entities, such as human faces and animals. He believe they were recognized as such even in very remote ancient times. The weathering and erosion of the granodiorite of which the plateau is composed gives rise to rounded anthropomorphic and zoomorphic features that, with a little imagination and insight, can be seen as very convincing sculptural forms.

The Markawasi sculptures are point-of-view manifestations, not typical sculptures in the round. Most can only be seen from a particular angle, and in many cases under particular lighting conditions, be in morning, evening, a solstice sunrise, by the light of a full moon, or under other special conditions.

Believers in the sculptures feel there are special spots that have been designated as viewing locations, and to move even a few feet from some of the spots means that the sculpture is obscured or not visible at all.

Certain sculptures appear to change forms as one moves or the light changes, perhaps from a face of one race to a face of another race. Such apparent subtlety and precision in sculpting and viewing has been used to argue for the reality of the artificiality of the monuments, but likewise has been advanced as strong evidence that they are simply natural structures to which humans brings their own meaning and interpretations.

The indigenous Andean peoples had a traditional concept of wakas (guacas), which can in an abstract sense refer to laws (as laws or nature) or knowledge, or could at times be personified as heroes and deities (similar, perhaps, to the Egyptian concept of neterw or divine principles) or as cult ancestors.

Wakas, it was believed, could sometimes take the physical form of uniquely shaped rocks or other natural structures. This is exactly what we may behold in the simulacra of Markawasi. The perfection and abundance of the manifestations of the wakas would make this an incredibly sacred place indeed. Schoch believe there is no doubt that Markawasi is a very powerful, energy-filled, and sacred place.

There are also numerous chulpas (chullpas), or tombs, to be found on the plateau, some neatly constructed of stone blocks (and in some cases rebuilt in modern times) and other tombs that simply utilized natural overhangs and shallow caves on the edge of the plateau. Bodies were bound and formed natural mummies, but most of the tombs have now been cleared out and any remains removed. Schoch and his team did come across human skulls and other bones in one of the more inaccessible regions, however.

The plateau is spotted with a number of artificial and natural lakes and reservoirs, most of which were dry during our August 2005 visit. Artificial dams and canal systems collect water during the rainy season and carry the water down to the village and terraced fields below the plateau.

Even today the people of San Pedro de Casta celebrate a ritual festival in October that celebrates the water that is captured on the Markawasi Plateau.

According to Ruzo, men opened the festival with rituals in honor of the Huari (their pre-Inca ancestors of a thousand or more years ago deified as the god Huari that was their protector; huari means giant or strong and the women and girls carry out the remainder of the ceremony over a number of days.

Antarctica – A Tropical Paradise Well Known to Our Advanced Ancestors