The Tunguska event was a large explosion which occurred near the Podkamennaya Tunguska River in what is now Krasnoyarsk Krai, Russia. At 7:17AM on 30th June 1908 there was a massive explosion in the atmosphere five miles above Siberia. It left the forest underneath burnt and charred, and pushed trees over in a 20-mile radius. It threw people to the floor and broke windowpanes 50 miles away.

One hundred miles away, witnesses reported seeing the explosion create an enormous black cloud of ash which was accompanied by a terrific roar. This deafening noise was even heard 300 miles away, and all across the world scientific equipment recorded strange occurrences in northern Russia.

To this day, bizarre growth patterns in plant and animal life can be found in the area. But what exactly happened in Tunguska that day? The nearest witnesses to the explosion were reindeer herders 25 miles from the blast’s epicentre. They were sleeping in their tents when the massive force blew them into the air.

One man was reported to have died, and the others lost consciousness. When they came round, they saw the forest around them devastated and smouldering. Other witnesses at a trading post in Vanavara 50 miles south of the explosion, reported seeing the sky split in two, with the northern part covered in flames.

A blast that washed over them was so hot it felt as if their clothes were on fire. It threw them 20 feet in the air, and when they regained their senses, a terrible crashing bang was followed by a noise which sounded like a downpour of small stones hitting the ground. More distant witnesses had seen the phenomenon’s final impressive act approaching. Residents in remote towns had seen a great ‘ball of fire’ with an iridescent tail streaking across the morning sky. Many thought it was the beginning of the great final apocalypse.

The Russian authorities were not able to send anyone to investigate the phenomenon until March 1927, when Leonid Kulik was chosen by the Soviet Academy of Sciences to find out what had happened. Kulik arrived in the area and noticed the lines of trees all knocked down radiating from a distant point. He took photographs and studied the land, but never found any fragments or meteorite samples. It seemed that whatever had caused the huge heavenly event had vaporised itself.

The absence of physical remains left the Russians perplexed. They felt that only a massive rock from outer space could have caused those effects. Following the dropping of atomic bombs on Japan during the Second World War, photographs comparing the devastation of Hiroshima and Nagasaki and the area near the epicentre of the Tunguska explosion displayed many similarities. 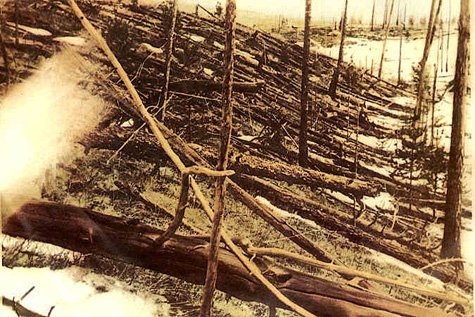 A revision of eye-witness accounts also increased the possibility of the Russian phenomenon being a nuclear explosion. However, no nuclear weapons existed in 1908, so some people speculated the blast was caused by an alien space craft crashing to Earth. Such an idea is now largely scoffed at, and has been replaced with theories of antimatter or a black hole imploding above Siberia.

By the 1950s, speculating about antimatter comets and meteoroids was a commonplace exercise for astrophysicists. One such, Philip J. Wyatt of Florida State University, suggested that the Tunguska event may have been a meteor made of antimatter. Willard Libby and Clyde Cowan took Wyatt’s idea further, having studied worldwide levels of carbon-14 in tree rings and noticing unusually high levels for the year 1909.

However, even in 1958 the theoretical flaws in the hypothesis were observed, aside from the evidence that was coming in at the same time from the first gamma ray measurement satellites. For one, the hypothesis did not explain how an antimatter meteor could have managed to survive that low into the Earth’s atmosphere, without being annihilated as soon as it encountered terrene matter at the upper levels.

Our improved scientific knowledge has been able to deduce that the explosion was the equivalent of a 40-megaton nuclear weapon. But Man’s ideas about what caused this amazing event, whether it involves UFOs or other intergalactic oddities, requires an understanding of a subject that we still have not quite grasped.