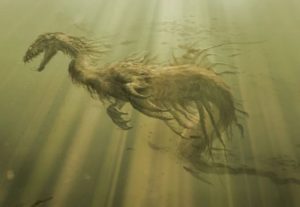 Some time ago, the Russian media has reported on a huge monster with the head of a serpent and the body of a crocodile lurking at the bottom of a lake near the village of Somin in Western Ukraine.

The lake is 56 meters deep. A number of underwater karst caves stretch its bottom. That is where the mysterious monster lies in wait, according to locals. As a rule, locals steer clear of the lake because they are said to have been terrified by the hideous creature hiding underwater.

It reportedly attacked domestic animals in the past. Some 30 years ago a local groom fell prey to the monster, according to one of the stories circulating through the village. The groom got drunk and fell fast asleep in the grass near the shore.

The monster reportedly crept out of the water and had the groom for lunch. Another creepy story features a disobedient boy who decided to take a swim in the lake. Needless to say, the boy has never come back home or so the story goes.

Several dozen similar lakes scattered around the former Soviet Union are claimed to have monsters, which scientists still have to identify. Some of the cases on the record are made up of pure mystification and rumors; others may contain some grains of truth.

Lake Khainyr is located in Yakutia, outside the Polar Circle. The lake is very small, measuring 500 by 600 meters, and quite shallow, about 7 meters deep. The lake is of termokarst origin; it is actually a thawed patch in the permafrost.

In 1964, Komsomolskaya Pravda published an article featuring an interview by G. Rukosuyev, head of the Northeastern Expedition of the Moscow State University. The scientist cited an account by one N. Gladkikh, a migrant worker hired by the expedition. Gladkikh claimed to have run into a lake monster on a misty early morning.

The worker was about to draw some water from the lake when he spotted an unusual water creature lying on the shore. He provided Rukosuyev with the following description of the animal: 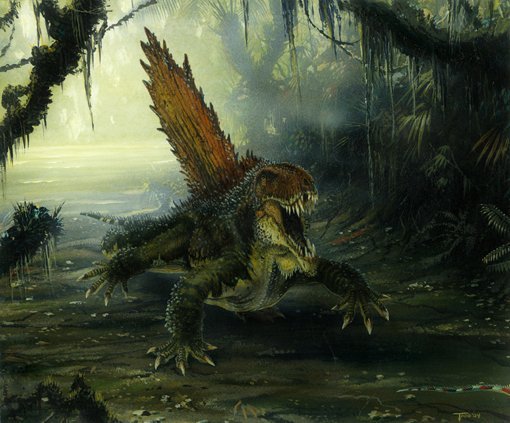 “It had a long gleaming neck with a small head. Its body was huge, covered with black-blue skin. There was a big dorsal fin on the back of its body. All of sudden, the animal slid back into the water. Some time later I saw it standing out the water in the middle of the lake. The animal started swinging its long tail to whip the water. The waves were rippling the surface of the lake.”

Aside from citing the “eyewitness account,” Rukosuyev also threw in a few other pieces of information to add color to the story. For instance, he claimed that there was no fish in the lake and birds had never landed on its surface. He also referred to some “muffled sounds and splashes of water” frequently heard by locals.

An expedition was dispatched to the location to investigate the case. As a result, the whole story proved to be a fake. Researchers found out that birds did land on the surface of the lake, which had a lot of fish swimming in its waters. None of the locals had ever seen any strange animals in the lake. Scuba divers combed the bottom of the lake but found nothing strange.

Researchers also had a heart-to-heart talk with Gladkikh, the so-called eyewitness. Gladkikh admitted that he had made up his story for reasons he could not clearly explain. He concocted it either to entertain himself and his friends or as an excuse for shirking his duties at work.

Little water goblins hiding at the bottom of Lake Vedlozero

Karelia is well-known for its numerous lakes, which are amazingly blue in color and rich in fish. Lake Vedlozero looks like a typical Karelian lake. It is 15 km long and about 7 km wide. The lake is of glacial origin. A large village sits on its left banks. The first reports of the Vedlozero appeared in the mid-1990s.

One of the reports quoted the late P. F. Yegorov, a local old-timer who claimed he had seen a large shining object fall into the lake from the sky. However, nothing was found at the bottom of the lake by members of several expeditions.

However, Viktor Sapunov, a cryptozoologist who took part in one of the missions, later published a report based on accounts provided by local residents who claimed to have seen “water goblins” in the lake. The mysterious midget men with rounded heads were somehow associated with the fall of the “heavenly body” in the lake. 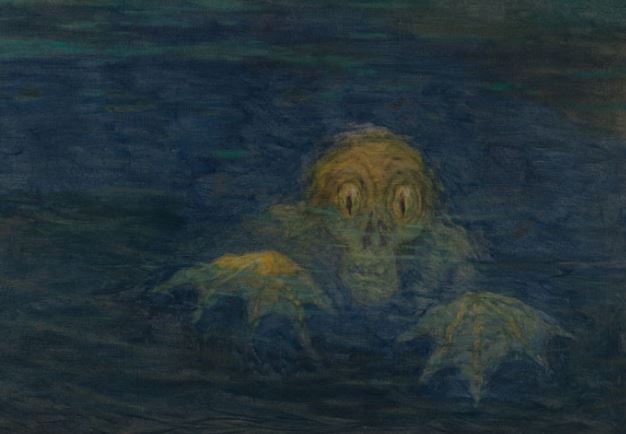 Our team arrived in the location last fall. We asked around several old residents of the village. None of them saw any “water goblins” in or near the lake. Some peoplerecalled spotting seals in the lake on several occasions.

“I go fishing on a regular basis. I have never seen any ‘water goblins’ in our lake. I have never heard about them. As for the seals, they drop by the lake now and then. One of the locals even caught a seal several years ago. He carried a camera on that day so he took a picture of the animal. There is nothing strange about seals coming down the lake. Lake Ladoga is not so far away from here. They just travel to and fro through the tributaries,” said Vasily Efremov, head of the village council.

Efremov’s explanation seems quite logical. City guys who went fishing in Lake Vedlozero may have spread the rumors about the “water goblins” after noticing seals in the lake. Any diver will agree that that seals in the water can be easily taken for humans.

Besides, Lake Ladoga is located in close proximity to Lake Vedlozero. Perhaps the territory populated by seals or other species of freshwater penniped animals in Russia was much wider in the past. The assertion could explain quite a few Russian legends of mermaids and water goblins.

A large number of lakes scattered around the vast territory of Northwest Siberia are the lakes that vary greatly in size and shape. They lie in the swampy taiga and forest tundra. Many of them are connected to one another via tributaries.

Professor N. Vereshchagin, a zoologist and self-proclaimed “fighter against “the snowman buffs,” recently published an article, in which he ironically quoted one of the letters addressed the Institute of Zoology. Prof. Vereshchagin poked fun at the letter’s author who maintained that either seals or hippopotamuses lived in some of the lakes in the Irtysh basin.

However, some enthusiasts of cryptozoology refrain from making a mockery of similar reports. They opt to check them first. The late Maya Bykova, one of the first “snowman buffs” in this country, made several trips to the area. She put down a number of eyewitness accounts; most of them read more or less like this:

“I was rowing my boat across the lake when I heard that splash. The sound of it made me stop. I was wondering what kind of a fish could have splashed like that. I lifted the oars and peered in that direction.

The next moment I saw something big emerge from the water, it looked like a haystack rising to the surface. I looked on and saw that the creature was covered with fleecy dark-brown skin resembling that of a seal. It made a hissing sound and dived back into the water.” 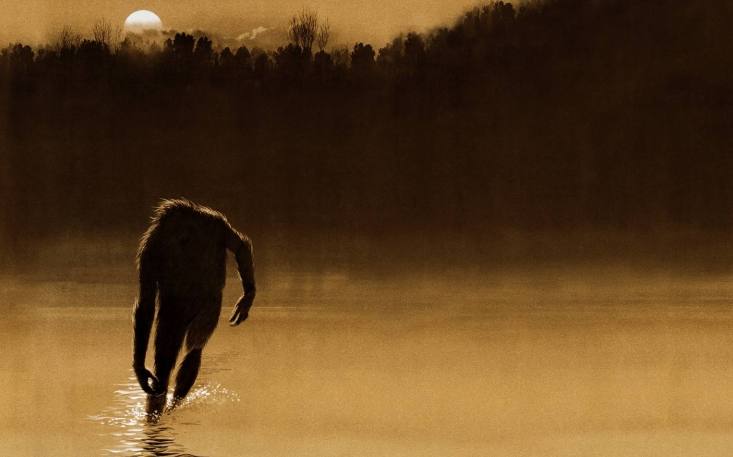 Other eyewitness accounts recorded by Bykova contain a similar description of the “monster:” creatures covered with fleecy dark-brown skin quickly rise to the surface, force air violently out through their noses and go back into hiding.

We are quite pleased to emphasize a few important things with regard to the above case as we look at it with the laws of nature in mind. First, the incidents did not take place in a single lake shut away from the rest of the world. On the contrary, the monsters have been seen in several bodies of water, which are frequently connected by means of tributaries.

And those lakes are scattered over the vast and sparsely populated area. There is enough room for thousands of species to live virtually unnoticed by anybody. Second, animals can get enough food to survive and multiply.

And, last but not least, any visual contact is most likely to involve local villagers who are very few in numbers, hence a sharp decrease in the possibility of a chance meeting. Besides, locals are not used to reporting their observances to the Academy of Sciences.

Given a rather skeptical stance on the phenomenon among members of science community, such a letter would be either ignored or laughed at.

The question is: What are those mysterious creatures? Their fleecy skins indicate that they are warm-blooded mammals… In my opinion, they could belong to some unidentified species of penniped animals, freshwater seals. If some seals can live in Lake Ladoga and Lake Baikal, what is so strange about other seals populating in other freshwater bodies of water?

Other theories look pretty weird, to say the least. One of them has gained lots of popularity recently. According to the theory, the lake monsters are mammoths which turned into aquatic animals for reasons unknown. The theory is simply preposterous because mammoths had very few sebaceous glands under the skin, and therefore their long hair could get easily wet.

A similar theory put forward by N. Avdeyev, a cryptozoologist from the city of Perm, features relic wooly rhinoceroses which somehow managed to survive. The latter theory does not seem so foolish, compared to the “water mammoths” of the former one. Still, it can hardly hold any water either.