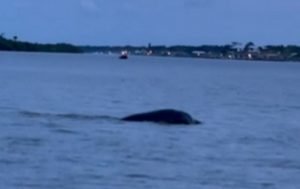 In the state of Florida, USA, in the lagoon of Indian River County, a strange sea creature of very large size was recently filmed on video (see below).

The author of the video and commentators are sure that this is not a dolphin or a manatee, because the creature moved differently and there was something strange in its appearance.

At the same time, the creature was quite large, about 15 feet in length (4.5 meters) and, as the author of the video described it, “muscular, like a bull.”

According to Joe Tiller, on that day, September 9, 2022, he was on a boat with his wife, on the territory of Menar May Park, near Edgewater. When he saw something dark and large moving noisily in the water, he thought it was a manatee, but looking closer, he realized that he was mistaken.

“Manatees are not uncommon in these waters, but this creature looked completely different! It had huge muscles, like a bull! And it seemed that it moved its shoulders more like a bear swimming under water. At the same time, my wife and I did not see he has no fur, no head, no limbs,” says Joe Tiller.

Tiller started filming the creature with his phone, but it soon sank into the water and never reappeared.

When he posted the video on Facebook a couple of days later, it attracted a lot of commenters. Joe has asked for their help in identifying the creature, including reaching out to members of the local Birds and Wildlife Society of Florida, but has yet to receive a definitive answer.

Tiller works for a boat manufacturing company and therefore spends a lot of time on the water, but for the first time in 5 years that he has lived in the area, he encounters such a mysterious water monster.

According to him, the creature was between 12 and 15 feet long and made “grunting sounds” as it moved. Watching the creature swim quickly through the water, working its muscles, Joe decided to swim away from this place, just in case.

Some experts still think it’s a manatee, just moving in a special way that manatees use when swimming in shallow water. However, manatees very rarely exceed 10 feet in length, and the author of the video is sure that the creature he saw was much larger.