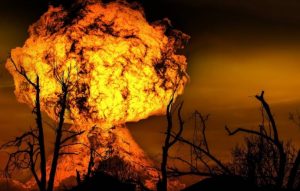 North American visionary Aristyllus (Aristyllus), who took such a pseudonym, apparently in honor of the ancient Greek astronomer Aristill of Samos, made a very loud statement.

The mysterious soothsayer, who refuses to disclose his personality to the world community and makes predictions exclusively on the Internet, successfully predicted the victory of Donald Trump in the US presidential election, the beginning of Britain’s exit from the European Union, the devastating earthquake and tsunami on Sulawesi Island in 2018, and many other significant events.

Now the self-appointed clairvoyant decided to tell us the most important thing: when the end of the world comes.

According to Aristill, humanity will disappear on June 10, 2307, that is, after 288 years. Thus, if this is true, none of us who are still alive will live to see the fatal date.

The seer claims to have clearly seen this scene in a prophetic dream. They say that the world will plunge into darkness with lightning speed, and people will die at once.

In this case, what will be the cause of the Apocalypse, the soothsayer is not able to say. Maybe the blame will be a nuclear war, a global man-made disaster or a large meteorite falling to Earth.

Anyway, the clairvoyant warns that the coming catastrophe is unlikely to be prevented, so humanity should enjoy the time it has left. After all, 288 years is quite a bit.

Moreover, if we believe in reincarnation, then we can all catch this fatal event for humanity.